Congressman Faso has introduced a resolution in Congress that recognizes the natural resources and economic importance of the Upper Delaware River watershed. It was supported by something called the Coalition for the Delaware River Watershed. As       much as anything, the resolution is looking to improve the area’s tourist trade and we are in full support of that. This picturesque region is well worth visiting. Have you spent much time there? Well maybe we can give you a good reason to visit.

We have often enjoyed driving west on the valley of the East Branch of the Delaware. It passes through a largely rural region which presents us with a very scenic drive. What you are bound to notice very quickly is how the slopes on each side of the river are so steep. The valley is narrow here and its slopes rise up and tower over the river itself.

That’s unusual in the Catskills region. Our river valleys typically slope down far more gently. The story becomes more interesting when you get a good map out. Take a look at our first picture. 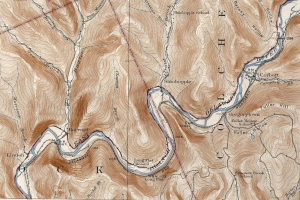 It traces the river from Corbett to Linden. Notice the broad sinuous curves that the river follows. These sorts of curves are commonplace among rivers but, not with this sort of river. These river bends have quite a story to tell.

The story goes back to the 1930’s when a New York State Museum geologist named Rudolf Ruedemann began looking at these rivers and did some deductive thinking. Ruedemann knew that meandering streams had to have formed on broad floodplains and so he, in his mind’s eye, traveled back in time and saw our western Catskills as they may have been during the Cretaceous Time Period, about 100 million years ago. Ruedemann deduced that the western Catskills region must have been flat at that time. No hills or mountains rose up as they do today. That flat landscape, he reasoned, was ideal for the production of meandering streams. And so it was that rivers which would become our modern East and West Branches of the Delaware, found themselves flowing in those broad sinuous meanders. And they were flowing across an enormous flat landscape.

Then things changed. The crust of our whole region began a long slow uplift. The East and West Branches found themselves in a rising landscape. Their meanders had no choice but to begin eroding into that rising land. The meanders were trapped as, above them, were those rising slopes. That is how our distinctive landscape came into being.