The delta of a river

We continue our journey down the Roeliff Jansen Kill. We began back at Bash Bish Falls and now we have arrived in Elizaville. The kill had been flowing southeast all this distance and had even crossed into Dutchess County. But now, curiously, it has turned sharply to the northwest and is heading towards its destination, a confluence with the Hudson River. But we are going to pause and focus today on the village of Elizaville. There is something special there.

Elizaville lies perched on a bluff that rises above the Kill just to its north. Much of the village is composed of houses built on the shores of the two lakes that are found in the center of the town. They are called, logically enough, “Twin Lakes.”

We have been traveling west on Route 2 and, as we enter Elizaville, we turn right and head north into the village. The road passes between the two lakes and quickly we turn left onto Hapeman Road and head west. Soon it drops down a steep slope, turns left and merges with a Pleasant Vale Road. This part of Hapeman Road has a lot of storytelling to do. 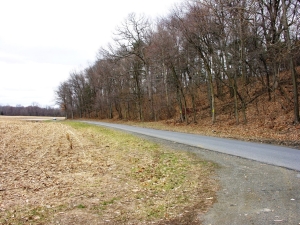 Pull over anywhere along Hapeman, get out and look around. Right along the east side of the road there is a very fine, and very steep slope rising, even towering above the road. Elizaville is built upon the bluff that is defined by the top of that slope. Almost all Hudson Valley geologists would recognize this feature; it is an ice age delta. Back at the close of the Ice Age, just after the glaciers had melted north and the valley was opening up again, something happened. A vast lake was left behind by the retreating glacier. There was, of course, a lot of meltwater, but there was something else. The crust of the earth here had been pressed down by the weight of the ice.

Off, a hundred miles or so to the south, the crust had already rebounded from a similar compression. But here in Elizaville the crust was still depressed. That meant that there was a basin just behind the retreating glacier, and that basin was filled with meltwater which formed what is known as Glacial Lake Albany. The Roeliff Jansen Kill would flow into Lake Albany. Today’s Elizaville marked the end of the river back then. Like any river flowing into any body of water, the Roeliff Jansen Kill would deposit the sediments of a delta.

Deltas form all over the world. They form where great rivers flow into oceans or where small brooks flow into ponds. They can be very large or very small. And it really doesn’t matter; in the end they all have the same morphology, or geomorphology if you prefer. All deltas are composed of sediment which has piled up to about the level of the waters. A very large delta will see sediments rise to just above water level. Thus is formed a broad flat surface called, by geomorphologists, a “topset.” Most of Louisiana is topset and so too is most of Bangladesh. Both regions are flat and rise just barely above sea level. The village of Elizaville is perched upon the topset of the Elizaville Delta.

Beyond the topset all deltas display steep slopes. Sediment, which had been carried across the topset, came to the outer edge, and tumbled down a slope. That’s how the foreset slope came into existence. Over time, the foreset will accumulate more and more sediment and advance towards the center of the lake. That makes the delta larger. The steep slope along Hapeman Road is the foreset of the Elizaville Delta.

Beyond the foreset you enter the broad flat deeps of the lake or sea, and that is what we see at Elizaville. West of, and across the Hapeman Road is a flat landscape; it is the old floor of Glacial Lake Albany. The top of the delta is at about 280 feet, while Hapeman bottoms out at 220 feet. The lake was thus 60 feet deep.

Once, Hapeman Street marked the end of the Roeliff Jansen Kill, but that is not the case anymore, our journey is not yet complete.