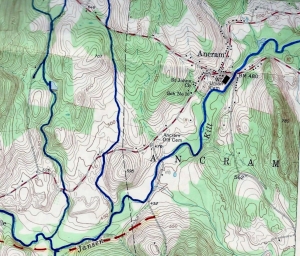 We have been traveling down the length of the Roeliff Jansen Kill and we would like to continue on the third episode of this journey. Last time we explored the “drowned lands” of the Copake region. There we “saw” the Roeliff Jansen drainage basin as it was when ice age meltwater had drowned much of it. Now we continue our journey west and downstream as we pass through into the Taconic Mountains. These aren’t actually much more than hills, but they do exert a profound effect upon the very nature of the Roeliff Jansen Kill.

This week’s journey begins at the village of Ancram and finds us heading west on Route 7. We have left the swamps and marshes of the drowned lands behind, and what we see is something that is a much more conventional river valley. We are driving west through Gallatinville, and Spalding Furnace, two old towns with a lot of history. It’s a pretty landscape and it is easy not to notice the geological details. But there are things that we hope you will take note of.

At Ancram itself you will see bedrock in the stream. In fact, there is a pretty good ledge of it. That’s something we have not seen so far on our explorations of the Roeliff Jansen Kill. Back at the drowned lands we saw nothing in the way of bedrock. The whole upper part of the drainage basin is blanketed in ice age sediments. Much of it is sand and gravel, a lot of it is probably ice age lake sediment.

But from Ancram on west to Elizaville we will see, here and there along the stream banks, a number of nice ledges of bedrock. Sometimes you can see glimpses of the river from the highway, and you will look down into something of a bedrock canyon. At other times you will have to make a left turn and follow a side road down to the Roe-Jan. There you are, again, likely to be rewarded with another nice view of a bedrock.

These are the Taconic Hills, and they are made of very old units of rock. In our minds eyes we can travel to shallow and deep-water oceans that existed here hundreds of millions of years ago. Those ancient oceans accumulated masses of sediments which have, since then, hardened into rock. Mountain building events, which occurred 450, 375 and about 250 millions of years ago, have lifted these deposits to their current elevations.

We don’t know when the Roeliff Jansen Kill was first established, but it was likely a very long time ago. All rivers patiently erode away at the landscapes beneath them, and our Roe-Jan is no exception. And that gets us to the most important part of this column. This stretch of the stream is very, very old, many millions of years at the least.

Look left and right and, when the view is a good one, you will appreciate that a lot of erosion went into the creation of the valley here. And that erosion took a very long amount of time. Here is our hypothesis for this part of the river: Erosion of the valley between Ancram and Elizaville began millions and millions of years ago. During that long stretch of time the valley reached pretty much its present size and depth. Then, during the Ice Age, the whole region was buried in glaciers. After these glaciers melted the Roeliff Jansen Kill found its way back into its old channel. Back upstream, glacial sediments clogged the old valley, and the drowned lands came to be formed.

We are not yet done. Route 7 meets an intersection with Rt. 2, and you should follow Rt. 2 toward Elizaville. It seemed to us that the canyon grew deeper as we headed west. There were some very good bedrock exposures along the highway too. At Elizaville this stretch of the Roeliff Jansen Kill comes to an end. We have reached the western edge of the Taconics and are about to leave those hills. We will find a new geological province and see a different stretch of the Roeliff Jansen Kill. But that part of the journey will come next time.