A starfish: living in Saugerties?

We were saddened to read of the recent death of sculptor Tom Gottsleben. His specialty was working with bluestone so you can appreciate our interest in his work. But our interest was heightened by a visit to his bluestone home “Spiral House” on the back of Mount Marion in Saugerties. Tom actually “won” one of us (Robert) in an auction sponsored by the Woodstock Land Conservancy. He bid more than anyone else for an afternoon of geological services. Robert visited Spiral House and Tom and his wife led him around the grounds.  Robert’s job was to wave his arms and explain the geological past of all the bluestone that Tom had adapted to his home’s architecture. Spiral House had also, long ago, been thoroughly glaciated and it was most fun to find the evidence of ice age glaciers. But It got still better when a sequence of black marine sandstones out back was found. Some of those strata were rich in marine fossils. Did Tom win Robert in the auction – or did was it the other way around? It was an absolutely unforgettable experience. 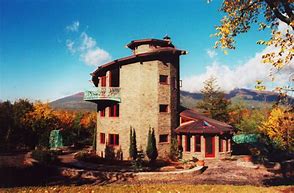 But this was not the first geology done on Mount Marion. Our main story in this issue is about what must be the most remarkable fossil finds ever found in the Woodstock area, and its discoverer. Let’s talk about that discoverer first. He was Thomas Cole, but not the painter; this was the Rev. Thomas Cole Jr., youngest son of the painter (our first photo). Cole Jr. was born several months after his father’s death. He grew up to be the rector of the Trinity Church in Saugerties until his death in 1919. 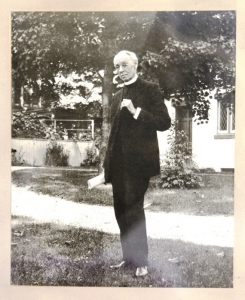 .  During his lifetime the younger Thomas Cole developed a keen interest in all things geological. One of three known obituaries, published upon his death in 1919, even refers to him as “the best amateur geologist in the state”.  Evidently, he did a lot of hiking and that led to his finding any number of fossils.

The Reverend Cole’s most important paleontological discovery was described in Bulletin 158 of the New York State Museum (1912). He located, atop the south slope of Mt. Marion, a sandstone surface densely covered with fossil starfish (our second photo). Mt. Marion displays 500 feet of stratigraphy. All of these strata were deposited at the bottom of a sea that once covered all of New York State. It’s commonly called the Hamilton Sea. Toward the top of this ridge are several ledges of sandstone that project outwards, above the surrounding slopes. These strata were first deposited as sand at the bottom of that Devonian age sea. Those sedimentary rocks represent sea floors that are a little less than 400 million years old. 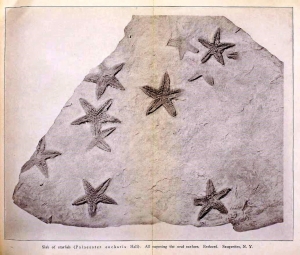 e Rev. Cole found and collected one slab, particularly rich in fossil starfish. He sent it off to the State Museum, and that quickly generated a lot of interest. It wasn’t long before Museum staff ascended Mt. Marion and located Cole’s starfish ledge. It must have involved a great deal of hard labor, but some 200 square feet of that sandstone ledge were eventually uncovered. This would have represented a large swath of Devonian age sea floor.  About 400 specimens of starfish of the species Devonaster eucharis were collected from it. Many of them were found in a fine state of preservation. They give us a very clear picture of their anatomy.   Altogether, this was a most remarkable discovery.

The largest of the starfish slabs, collected about 1911, has been (please forgive us) a star attraction at the State Museum for many years. What is more remarkable than the abundance of these starfish is their close proximity to a large number of sizable fossil clams. This was a Devonian age seafloor that was populated by clams of several different species. They were large clams too. And large clams, today, as probably in Devonian times, provide hearty meals for starfish.

Living starfish attack living clams and so, no doubt, did fossil ones. At least one fossil starfish was even found astride two open clam shells (third photo). The mouth ends of the starfish were commonly found facing the innards of the clams. It is a most astonishing juxtaposition of predator and prey, something the fossil record rarely preserves. These are Devonian age seafloor dramas and that’s what the Reverend Cole seems to have recognized. 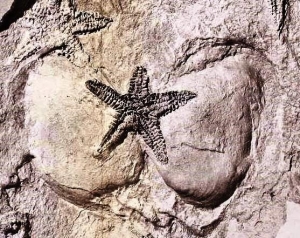 And this last circumstance conjures up an image of another, even more remarkable bit of history. Those starfish were found in the process of their attacks. That means some sudden catastrophe must have instantly overwhelmed them. Geologists suspect that some sort of submarine avalanche must have swept across this seafloor just at the moments when those attacks were underway. Masses of soft sediment, swept by powerful currents, seem to have suddenly buried both predators and prey. This is something that does turn up in the fossil record – but rarely. It was a most unusual instant in time, preserved like a snapshot. Scientists are always wary of accepting the validity of such unlikely events, but the two of us have seen similar ledges and are inclined to think all this really happened just as has been described.

In the end, this was truly a great achievement for the Reverend Cole, a genuinely important one scientifically. We gain insights about Thomas Cole Jr. from all this. The Mt. Marion discovery could not have been a one-time stroke of luck. Cole must have spent enormous amounts of time exploring and looking for fossils.  He seems to have been a determined geologist.

We have never found the trail up to the fossil ledge. It is quite possibly off of Fish Creek Road. Do you know the way?