Where the boys are.

You might remember the discovery of the Hyde Park mastodon. That was back in 1999. A local family, the Loziers, wanted to enlarge the pond that was in their backyard. When work was underway, they noticed what they thought was a log. That turned out to be the limb bone of a mastodon. Weeks of intense excavation by hundreds of volunteers resulted in the retrieval of an almost complete skeleton. It, eventually, was mounted and is on display at the Paleonto0logy Research Association Museum in Ithaca. 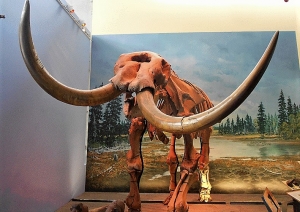 The animal was an adult male between 30 and 40 years in age. It was speculated that he was walking on the pond’s thin ice when he fell through and drowned. But is that it; is that the whole story? Maybe not. Recently, an article in a professional journal called Current Biology focused on another type of elephant – the mammoth. Researchers were studying the genetics of 98 Siberian mammoths. They were surprised to find that 69 of them were males. When they studied the literature, they found that this was the norm. Wherever large numbers of mammoths (and probably mastodons) were found, similarly large percentages of them were males.

They reasoned that, at birth, there likely had been an even numbers of males and females. So, what had happened to all those males? Why had so many of them died and, more importantly, why had they been preserved in such disproportionate numbers? Here is where we come across one of the leading philosophies of geology: “the present is a key to the past.” When geologists (and paleontologists too) come across a quandary from the distant past, they look to the present for a solution.

In this case, the biology or better the sociobiology of modern elephants may offer a solution to the problem. Modern day elephant herds consist of females and juveniles. They are led by experienced older females. Male elephants live solitary lives or are found in smaller male herds. The thought is that experienced female matriarchs can lead their herds away from dangers that they have, from life experiences, learned about. But males, especially solitary males, are more likely to behave in reckless manners. They are risk takers and that leads to what mammoth researchers labeled as “silly” deaths. Such males are more likely to fall through ice or sink into bogs. We have read about one particularly disturbing example. One male mastodon was found still standing in a small pond deposit. He may have died a slow death. When such things happens, their corpses are likely to end up buried where they can be preserved and, many thousands of years later, discovered by especially bright primates. Members of female herds die undramatic deaths in locations where they are not likely to be preserved.