Have you ever been to the Devil’s Tombstone? That’s a very sizable boulder at the Devil’s Tombstone Campground in the eastern Catskills. Make your way to Rte. 214 and head north until you reach Stony Clove Gap, a great canyon that cuts through the mountain there. You can park right in front of the boulder. It’s a lot of rock; it does look like a giant tombstone with its nearly rectangular shape and almost, but not perfectly, upright positioning. It’s certainly worth visiting and there are good hiking trails in the vicinity – come warmer weather. 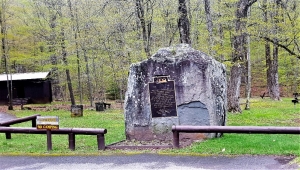 But the Devil’s tombstone may be more than just an oddity. It forms a striking image, begging for some sort of explanation. There has been widespread hypothesizing that it is a stone monolith, somehow manipulated into its present state by a long-ago prehistoric culture. We heard that story decades ago and never gave it much thought. It is claimed that the Tombstone lies near the northwestern end of something called the Hammonasset Line. That is a geographic line that points to Council Rock on Long Island, a similarly large boulder. Furthermore, it is said that its compass direction matches the alignments of both the winter and summer solstices.

Patterns such as these call for attention. A scientist seeks to find a solution using the famed, but not widely understood, “scientific method.” The first step (of five) in the scientific method is to define the problem that needs solving. Ours is simple: what is the Devil’s Tombstone and how did it get to be what it is? The second step in the method is to study the problem and gather as much knowledge about it as possible. The third step is to describe hypotheses that offer potential solutions to the problem. It is always better to have as many hypotheses as possible; it is not always likely that the first one to come to mind will turn out to be the “winning” solution.  After that comes step four, perhaps the most important: falsification. One by one the available hypotheses are tested. Each one should generate if/then statements. If the hypothesis is correct, then it follows that something else should be true. One by one the hypotheses are tested and, one by one, many of them fail the testing process and are falsified. If all goes well, in the end only one hypothesis will remain and may well come to be seen as the solution: something scientists formally call a scientific theory. The theory is regarded as the highest level of explanation in science; it is thought to have been proven, as thoroughly as humans can prove anything.

The stone monolith idea for the Devil’s Tombstone is a compelling hypothesis but it deserves to be joined by others; if it can survive competing challenges then if may well rise to the lofty level of scientific theory. Finding other hypotheses is our intent in this column. We have spent some time exploring the Devil’s Tombstone vicinity and we have been combing the geologic literature for the Stony Clove area as well. That has taken us through step two of the method.

Let’s go to step three – hypothesizing. We have developed two more of them. The first is that the Devil’s Tombstone may have formed as the result of it having fallen downhill from the steep slope rising above it. That may sound unlikely, but any hypothesis, no matter how unlikely should be tested. We, in fact, had no trouble finding at least one good very nearly vertical boulder up the road a bit. It was surrounded by a large jumble of other nearby boulders, all in various inclinations, all of which were equally unlikely. These had clearly all tumbled downhill to where they are today. Our gravity hypothesis has passed a test–sort of. Gravity could have, similarly, produced the Devil’s Tombstone, but we were just not happy with this notion. This hypothesis predicts that there should be a lot of other gravity-slide materials very near Devil’s Tombstone. The Tombstone is isolated and that is troubling. 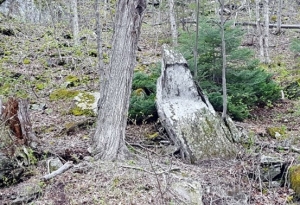 Steeply inclined boulder up the highway from the Devil’s Tombstone

We went back to step two of the method. We studied ice age geology maps of the area, published by the New York State Museum in 1935 and 1983 and soon had another hypothesis. Glacial geologists have long understood that, at the very end of the Ice Age, one final advance of the ice had thrust its way through Stony Clove, heading south. It was very possible that such advancing ice had carried the Tombstone along with it and deposited it where we see it today. When the ice melted away, the Tombstone was left in its unlikely steep slope. The Tombstone would be what is called a glacial erratic. This is an interesting and appealing hypothesis but, still, its curious inclination and isolation remained as problems.

So, how do you test this hypothesis? The ice age erratic hypothesis, in fact, does generate at least one good prediction. If the Devil’s Tombstone was glacial in origin, then we should be able to find similar boulders elsewhere, especially in similar ice age settings. We went looking and we found a good one. The town of Windham is known to have had had a glacier passing, east-to-west, through it exactly at the same time the Stony Clove ice was active. And, there, at the west end of Windham, just past the Fire Department, was something we have heard is called “Cabin Rock.” It even has its own historical highway marker. And, like Devil’s Tombstone, it is very nearly vertical. But there is something else; it is still partially buried in glacial sediments; Thus, it could not have been erected by a prehistoric culture. It must be a true glacial erratic. 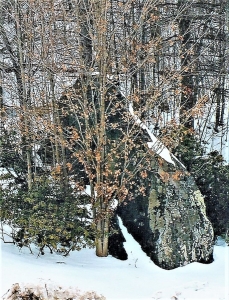 Our glacial erratic hypothesis seems to be just as good as the monolith one. But, is it a better hypothesis? There are few, if any, doubts about our Cabin Rock interpretations, and they should work equally well for Devil’s Tombstone. How do we decide about the Tombstone? The monolith hypothesis generates a very strong prediction. If this was an important location on the Hammonasset Line and if the Hammonasset Line was, indeed, an important cultural institution, then there should be some archeology there, and perhaps a lot of it. If there is sufficient archeology then the monolith hypothesis looks good; if not, then it would seem to be falsified.

We argue for the erratic hypothesis. But we are not archeologists, so we can only await archeological evidence. It’s spring and right now flints should be easy to spot.

Contact the authors at randjtitus@prodigy.net. Join their facebook page “The Catskill Geologist,” Read their blogs at “thecatskillgeologist.com.”

Katrina’s Floods: Here? The Daily Star, 2007 Updated by Robert and Johanna
Birth of a gorge On the Rocks the Woodstock Times, Sept 2011
Cabin Tales #5: Noah’s Flood? The Woodstock Times; On the Rocks June
Visiting a disaster: Windham Windows Through Time; The Register Star Sept. 2011
Visions of a distant past, Pt. two –“From the Mountain House Ledge.”
Go to Top