A visit to Echo Lake

The Catskills are rightfully known for their wonderful scenery. Our mountains abound in hidden green cloves with brown and red ledges towering above. Our hiking trails bring us into these secluded natural settings. They have an air of primeval mystery and our park system keeps them that way. Elsewhere around the globe, there are many very different types of mountain landscapes. About as different as you can get are the Alps: there is nothing hidden or secluded about those great peaks. They stand right in the center of Europe with their white mountaintops soaring above the surrounding lands with an in-your-face dominance of the horizons. No one would ever get the Alps mixed up with the Catskills; no one, that is, except a geologist.

Our image of the Catskills of 14,000 years ago has a great deal in common with what we see in the Alps of today. The emblem of today’s Swiss landscape is the Alpine glacier, often called a niche glacier or commonly as a cirque glacier. These form in bowl-shaped mountain depressions, called niches, where snow accumulates, piling up to great depths and hardening into the ice that then begins its flow downhill as a frozen stream. During times of cold climate Alpine glaciers advance into the valleys below; during warmer times they melt back and sometimes even disappear. Not surprisingly, they are very erosive phenomena and have done a lot to shape the Swiss terrains. In fact, we have a word for these special landscapes; we call them “Alpine” landscapes. Similarly, the local glaciers of our ice age did a great deal to form the Catskills as we know them today. If you want to truly understand your Catskill landscapes, you must know something of the Alps!

And that includes, right here in the Woodstock vicinity. Take the red trail almost to the top of Overlook Mountain and then turn north on the blue trail. In about another mile take the yellow trail off to the west. You will soon find yourself descending into one of those mysterious hidden Catskill cloves. At the bottom is a beautiful little pond called Echo Lake. That’s not one of those silly romantic sounding names picked by a housing developer, the lake is very aptly named. Clap your hands or shout abruptly and you will find out why. 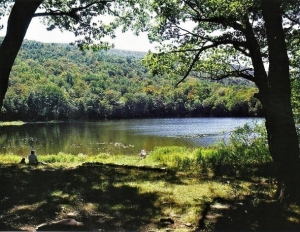 Look around you and you will see that Echo Lake is nestled at the bottom of a grand natural amphitheater. Steep slopes rise above on three sides. The only gap is to the southwest, there the lake waters make their escape and flow into the upper Saw Kill. This type of amphitheater is known to geologists as an Alpine niche, a place where once a glacier got organized. We also call such a feature a cirque and it was within the Echo Lake cirque that the Saw Kill glacier accumulated and then began its slow downhill flow. Beyond Echo Lake the Saw Kill glacier flowed at least as far as Cooper Lake and probably much farther.

Cirques are common Alpine landscape features. The steep walls behind the ice are called the headwalls; They were eroded by the ice that was once present. As the ice began its downhill motion, it plucked blocks of rock loose and thus shaped the steep walls. Similarly, the passing ice scoured out the basins of the lakes; in Switzerland such basins are called tarn lakes. Echo Lake is perfectly typical of an Alpine cirque and that is what makes it such a remarkably attractive Alpine landscape feature.

Cirques are common phenomena throughout the Catskills, but we don’t know of any others as well developed as this one. How many others are here and where are they located? That has been a heatedly debated issue ever since the early part of the 20th Century when they were first recognized. Some geologists have argued that there are very many of them, perhaps scores. Others have argued that there are only a handful and that all the other supposed cirques are nothing more that stream erosion in the upper reaches of our mountains. We think that the Echo Lake cirque is a safe bet. It’s at the top of the Saw Kill glacier which is one of the best known and most widely recognized Alpine glaciers of the Catskills.

It’s a wonderful time of the year to visit Echo Lake, and when you go there please do enjoy our summer scenery. But also pause for a moment and try to imagine the snowy high peaks of Switzerland, for that is exactly what you are seeing here.