On the Rocks – The Woodstock Timed

As geologists we are, of course, very fond of rocks. We find the study of bedrock always interesting, often fascinating and occasionally even engrossing. But there are limits; they are, after all, just rocks, and rock is pretty commonplace stuff. But, occasionally, you will round a bend in the trail and be startled by some remarkable bedrock exposure. There are a couple of these on either side of Kaaterskill Clove. When we visit with groups of people, there is almost always someone who cries “whoa” in complete surprise. This remarkable rock is locally called puddingstone.

Go to North Lake State Park and take the blue trail north. That’s the escarpment trail and it is always worth the hike. As you head up the trail you will pass over the ledge at Artist Rock and then cut uphill and away from the escarpment for a bit. Eventually, you will pass left of, and then under a knob of rock called Sunset Rock. It is right there that you first encounter the puddingstone. The puddingstone ledge is up to 20 feet thick. It rises vertically above the trail, so it is quite imposing. But it is the composition of the rock that generates the excitement.

Puddingstone is known, formally, to geologists as conglomerate. That’s a rock composed almost entirely of pebbles. The pebbles are all cemented together, and the effect is to produce a visually stunning lithology. In this case there are a great number of cobbles mixed in with the pebbles so that enhances the visual impact.

But what exactly is a conglomerate? That is, how did this peculiar rock come into existence? The answer to those questions comes slowly with a close examination of the rock. First, notice that most all of these pebbles are nicely rounded. We say that they have been stream washed and rounded by abrasion during a time when they were carried down a river. But where did the stream come from? 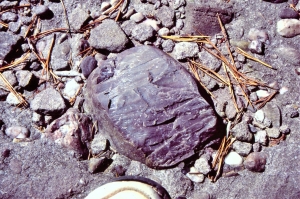 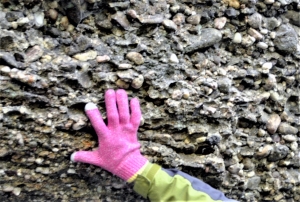 Look carefully at the pebbles and cobbles and you will find that they are of all sorts of different types. The largest number are white pebbles of quartz. As you look carefully, you will find a number of other lithologies. Let’s skip a detailed analysis, but it is safe to say that the pebbles are heterogeneous, and they must have come from a place where the bedrock was equally heterogeneous. That was an old mountain range.

The unit of rock is called the Twilight Park Conglomerate. It’s named for a community, across Kaaterskill Clove, where some more nice exposures can be seen. The Twilight Park Conglomerate is part of the Catskill sequence. That’s sediment which washed out of the ancient Acadian Mountains during the Devonian time period. To the east those mountains once towered, perhaps as high as the Andes of today. Like all mountains, they suffered from weathering and erosion and slowly crumbled. During their destruction there were times when unusually large amounts of very coarse-grained material washed out of the mountains, traveling down steep mountain streams, and washing out onto the flat lands below. That’s what happened here.

Look east from Sunset Rock. Imagine blue and purple mountains rising before you. They are white at their peaks. Enormous heaps of brick red coarse sediment lap up onto the flanks of those mountains. Great pounding, roaring, white water mountain streams are cascading out of the mountains and their raging flows continue across those red sediments. The streams flow out onto a large flat delta plain and they slow down as they lose their slopes. It’s then that they lose their ability to transport gravel and they deposit the thick layers of pebbles. These streams wash back and forth and spread the gravel out in thick deposits. Tens of millions of years pass by and the gravels are slowly buried by a thick sequence of more sediment, mostly sand. It all gradually hardens into today’s Catskill sequence.

Those old mountains eroded away entirely, hundreds of millions of years ago. These puddingstones and their pebbles are part of what is left. That, we think, is fascinating.