WHAT’S REALLY BURIED IN THE COLONEL’S TOMB?
On the Rocks
The Woodstock Times, Oct. 24,1996
Updated by Robert and Johanna Titus

Prattsville, along the banks of the Schoharie River, is steeped in Catskills history. It’s emblematic of the most progressive aspects of the area’s story, and at the same time, it represents many of the mistakes people made as our region developed. Zadock Pratt was the towering, overwhelming personality in the town’s development. Even today his influences permeate the village.
Pratt was a founder of the Catskill tanning industry. From 1833 to 1846 his Prattsville tanneries turned out shoe leather for the New York City market. His tanneries, however, were dependent upon the bark of the hemlock tree, and when they were all cut down, the industry closed. We frown upon the wanton destruction of the Catskill hemlocks that characterized the 19th century, but our collective wisdom is based upon a history of trial and error. It was men such as Pratt who provided the errors.
But Pratt is also remembered for progressive attitudes toward urban planning. His Prattsville was a pioneering model in that field. Pratt laid out the streets, built the Greek Revival homes and planted the 1,000 trees that lined the village streets. Pratt founded churches and the town’s academy as well. Prattsville today is still truly Pratt’s town.
Zadock Pratt was a great man, but we suspect that history would have mostly forgotten him except for the one singular act of vanity that he was responsible for. Pratt, the Rameses II of the Schoharie, is remembered for Pratt Rock, his would-be tomb. 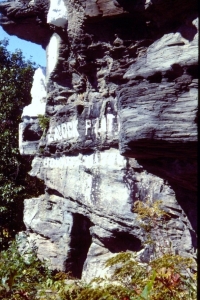 Pratt Rock consists of a series of stone carvings on a glacially plucked cliff along Rte. 23, just east of town and overlooking the old Pratt farm. The site is now a town park and open to visitors. You can hike the winding path up the steep slope toward the main carvings. If you tire along the way you can sit upon stone seats thoughtfully carved into the mountain. The main level of carvings displays images and symbols of his life. There are carvings of the hemlock tree, a horse which hauled the bark to the tanneries, a strong arm to do the work and other emblems of the great man’s life. There is a bust of Pratt himself and a poignant carving of his only son who died in the Civil War. Then there is the Pratt burial chamber itself.
Unlike the pharaohs, Pratt was never buried in the grotto carved out for him. One story is that the chamber was unsuitable for burial as it leaked water when it rained. The chamber is still there, and when we looked it over, we found that there may be some truth to that tale, along with a good geological story about Pratt Rock.
Pratt Rock is carved into sedimentary strata from the old Catskill delta. Deposited nearly 400 million years ago, the sediments here record the coastal regions of a delta similar to that of the Mississippi River today. This was once the coastline of the old Catskill Sea. Rivers flowed across this location and poured their waters into the old ocean.
There is a lot of history here. We had little trouble finding bits and pieces of the old Gilboa forest, and we could picture its foliage along the old stream banks. But the most interesting horizons we found were those at the burial chamber itself. The ceiling of the chamber is made up of inclined strata. This horizon of rock formed on the floor of an old stream channel. The beds slope down to the right, which was once one side of a river, and farther along the outcrop they rise up again on the other shore. When we looked at the chamber ceiling, we found a horizon rich in a hash of broken plant remains. This stratum is likely very porous and it’s quite possible that this accounts for the leakage that caused the burial project to be abandoned. The pharaohs of arid Egypt faced no such problem.
And so, this is one of the many ironies of geology. The great Zadock Pratt is buried in a nearby graveyard with all the other common folk of old Prattsville. That may be because about 375 million years ago some small river made a wrong turn. It’s not Pratt buried in Pratt’s tomb, but the sands of an ancient river!