JIMMY DOLAN NOTCH
On the Rocks, The Woodstock Times
Nov. 9, 1996
Updated by Robert and Johanna Titus

The fair-weather hiking season begins slowly. In April the first clear, dry, warm days lure us out into the mountains. We take a professional interest in that time of the year; there are no leaves yet and we can see all the bedrock exposures very well. As the weeks advance the foliage appears and the green, even if it does hide the rocks, adds much to the views. The richness of the color increases until late August which is gorgeous with its dense botany of spinach green. Nature seems to celebrate its own bounty at that time of the year. But it gets even better as autumn approaches. Now nature deems appropriate a grand and glorious climax to the season. There is a brief but intense explosion of color like the end of a long fireworks display. What hiker can resist this seasonal finale?
And, so it was, in the middle of October, as the foliage hit that climax, that we had the opportunity to accompany a small group from the Adirondacks down for their first hike into the Catskills. Our goal was Twin Mountain. This peak, being right in the heart of the Catskills was a natural choice for newcomers. 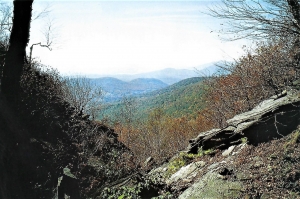 As luck would have it, this long-planned hike fell on a perfect autumn day. We began our ascent at the Prediger Road trailhead and soon entered into the forest preserve. The trail takes you up along an unnamed creek to a fine gap in the mountains called Jimmy Dolan Notch. From there we turned west and continued up the slope of Twin Mountain itself. A final 500-foot climb took us to the top of the easternmost of the two summits that collectively make up Twin Mountain. There before us were the southern Catskills in full autumnal regalia. To the east was Plattekill Clove, to the southeast was Overlook Mountain, and to the south was Cooper Lake. On the distant horizon was the Burroughs Range, with Slide Mountain reaching the highest. But it was to the southwest where the slopes of Olderbark Mountain could be seen that we found most picturesque scene. The whole autumn season could be seen there. The lower slopes of Olderbark were mostly green; it was still September down there. Above, the slopes steepened and graded into a yellow gold, and there it was October. From there to the top, the mountain was brown and then gray. There it was already November and the leaves were gone.
The top of Twin Mountain made for a wonderful stop before pushing on and we enjoyed the view as much as any landscape artist might. But geologists never go off duty and we had seen something on the way up which gave our mind’s eye a very different view of this landscape. Jimmy Dolan Notch was peculiar; it was asymmetric. The northern slope to the notch was steep but unremarkable. The southern slope was different. Looking south through the notch, there is a lovely view of the mountains beyond, but the view is through a surprisingly vee-shaped notch. This vee had caught our eyes, and on the way down, we explored it. It was the kind of notch usually carved by a powerful whitewater stream. We could easily imagine loud, raging, foaming currents passing down the mountain here. But there was no stream and no evidence of one. And where could the creek have come from anyway? Whitewater streams are common on the lower slopes of mountains, but not at the tops; there is no source of water up there. Then we found a theory to explain what we were looking at.
About 17,000 years ago a massive ice sheet abutted the central Catskill Mountains along a line that extended from Plattekill Mountain to Twin Mountain to Stony Clove and then westward. It’s been called the Wagon Wheel ice margin. Some of the ice probably poked its way through Jimmy Dolan Notch, but then, as the climate warmed, it began melting. As we turned north and looked back through the notch, we could now “see” that great ice sheet rising just a little higher than the notch itself. It glistened wet in the sun that was melting it. Between the ice and Twin Mountain was a small meltwater lake. From it, water was cascading through the gap. There was the whitewater stream that we had needed to explain our landscape problem.
Such beautiful but different scenes at the same site and at the same moment: we looked south through Jimmy Dolan Notch and there was a perfect golden autumn afternoon. Then we turned north and looked through the notch to see an ice age vista during one of the high points of glaciation. Twin images at Twin Mountain.

Learn more about Catskill glaciers in the Titus’ new book The Catskills in the Ice Age, the expanded and revised 3rd edition from Purple Mountain Books and Black Dome Press.
Contact the authors at randjtitus@prodigy.net. Join their facebook page “The Catskill Geologist.”