Geologists are deductive scientists. We go out and study outcroppings of sedimentary rock with the purpose of gathering evidence of how they came to be formed. The evidence is mostly descriptive; we look at the rocks and see things in them that speak to us of ancient environments. Each small observation leads to a deduction and a series of observations and deductions leads us to broad conclusions. Let’s go out and see how this works.
An especially fine outcrop can be found in Mohican Canyon just west of Lake Otsego’s Five Mile Point. Five Mile Point is a mass of sediment that projects out into the lake. You guessed it; it’s five miles north of Cooperstown. Take Route 80 north until you get there and then turn left onto the road that ascends the hill. On each side of the road you will encounter very fine exposures of rock. The rock is made up of layers; it is stratified. That leads us to our first deduction; layered rock forms at the bottom of the sea. We learned earlier about the Catskill Sea which once covered our region. We have gone back about 375 million years and found that sea once again.
The strata are a mixture of sandstones and shales. We can make more deductions. Shale forms as mud on the bottom of quiet, probably deeper, seafloor. Sandstone accumulates in more active, perhaps more shallow seas. When shale dominates, then we deduce deeper water; when sandstone predominates we can deduce shallower settings. When sandstone and shale are evenly mixed we are in between.
The thickness of the strata helps too. When the beds are thin we can deduce the likelihood of quieter, and probably deeper, conditions. When the beds are thick we can deduce rapid current activity which is associated with shallow seafloors. 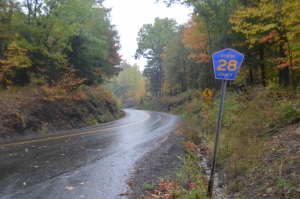 The lower stretch of our outcrop is mostly of thin bedded shale. We can deduce that this sequence represents fairly deep water sea bottom. But as we ascend the road, things change. More and more sandstone starts to appear in the outcrop and more and more often the sandstone is thicker bedded. Some sandstone strata are a foot thick.
If you have a chance to take the trip, then start at the bottom and stroll slowly towards the top of the outcrop. See if you can agree with our observations. But what all does this mean?
We need to do a little stratigraphy. That’s the science of stratified rocks and it’s practiced a lot in the Leatherstocking Country. All of our rocks up here are stratified. The rocks at Mohican Canyon are classified as belonging to something called the Otsego Sandstone. That’s a unit of rock which is commonly seen at outcrops in our area. The lower stretch of the Otsego is called the “Otsego A” and the upper part is the “Otsego B.” That’s fairly informal but quite functional stratigraphy and it leads us to our most important deductions.
The sequence here speaks to us of a shallowing sea. During Otsego A times, the Catskill Sea was quiet and accumulated lots of mud. Still water runs deep and that’s the case with the Otsego A; it was a relatively deep body of water. Today, you would have to go quite a distance offshore to get to a modern Otsego A. But time never stops and as our region passed from the time of A to the time of B, the waters of the Catskill Sea were shallowing.
We geologists find shallowing sequences quite often. Our observations and deductions lead us to recognize times when seas were shrinking away. We call such events “regressions” and the one at Five Mile Point is a gem. We are looking at real history here; this actually happened. Once there was a deep beautiful saltwater Catskill Sea here in Otsego County. It spread across upstate New York for an enormous length of time and then it began to disappear. Where did is come from and where did it go? We have just begun our story; we need many more observations and many more deductions.