FLOODS ON THE OVERLOOK TRAIL
On the Rocks
The Woodstock Times, Oct. 1996
Updated by Robert and Johanna Titus

It’s autumn and it’s a time when we in the Catskills are given some of the best weather there is to enjoy the outdoors. There are few places better suited to the mood of the season than the Overlook Mountain trail. The word trail is a bit of misnomer. This was once a highway of some significance, but those days are over; it’s just a hiking path now.
The trail takes you past Echo Lake and onward toward Plattekill Clove. There are the subtle signs of a history along the way. You can see where quarry stone was used to reinforce the road for heavy traffic. It was needed; the Overlook Road once carried wagon loads of heavy Catskill bluestone. There were a lot of active quarries up there once, especially at the north end of the one-time highway. Look for a fork in the trail there, where the Blue, Red and Green Trails intersect. Within a few hundred yards of that spot are quite a few of the old quarries.
Some quarries are overgrown, but most are very much as they were on the day that operations halted. Quarrymen sought after flat-lying stratified sandstone, sometimes called flagstone, but mostly called bluestone. The rock easily split along its strata into stone useful for sidewalks and as various types of building stone. If the rock wasn’t made of flat-lying strata they left it be; it was of no monetary value and therefore of no interest. But it’s that odd stone that is of the greatest interest to a geologist; the non-flat lying strata tell the best stories.
Much of the rock which ended up left behind is what we call cross-bedded sandstone. These are very nicely defined strata which occur in sets that are never horizontal but intersect each other at all sorts of angles. The pattern is eye-catching; the rock seems to possess a written record of its own history, a hieroglyphic if you could only read it. It does and you can. 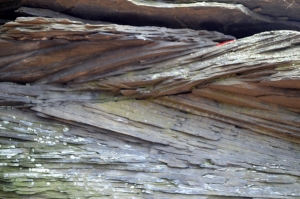 Most bluestone was once sand that was deposited in ancient stream channels. That was about 380 million years ago during the Devonian time period. Cross-bedded sands of this sort form in the deepest, most rapid flowing part of stream channels, a churning, swirling time in the history of those ancient rivers. Rapid and strong currents scoured out troughs on the stream bed. Later, when the currents slowed down, sand was deposited, and it filled in the original troughs. Over and over the process was repeated and eventually the cross-bedded sands formed. Streams of this sort tend to shift their channels as they meander across the flood plain, and the sands were left behind under a thickening accumulation of flood plain deposits. When thick enough the pressure began to harden the sediment into the sandstone we see today.

These deposits accumulated at times of maximum flow and these are likely to have been floods. Floods to humans are awful events, powerful and destructive episodes when stream banks collapse and plants and animals are killed. Nowadays when floods happen, newspaper headlines scream of the damage. Remember last January [1995] in the central Catskills.
But these were events which occurred long before people. All the terrible events that we associate with modern floods occurred here; surely many primitive animals died, and perhaps whole forests were washed away. But no one was there to mourn the losses, nobody cleaned up or repaired the damage. No newspapers or history books recorded these awful events and life just went on. Only the rocks carry the “hieroglyphs” of these terrible moments in the deep-time history of our region and only geologists can read them.
If you get a chance, pick one of those beautiful, clear, dry, warm fall days and go hike the Overlook trail. Find some of these cross-bedded strata. These were awful moments that Nature prefers to forget. There is violence and power here, there is noise and turmoil, there is the struggle for, and giving up of life. Take a good look at these strata and appreciate the history they record. Such things can give you a whole different point of view on rocks.