Journey to the bottom of the Sea
On the Rocks; the Woodstock Times
April 30, 1998
Updated by Robert and Johanna Titus

We geologists, over and over, are used to seeing vivid moments from the past, recorded in the rocks. We never become blasé’ about this, and we shouldn’t; we are privileged to have these visions. We were reminded of this recently when we encountered an especially fine outcrop along Rte. 9W, at Glenerie Falls about a mile and a half south from its intersection with the Glasco Turnpike. It’s the Glasco Limestone which is commonly seen along the highway hereabouts. There was one very broad surface which caught our attention. It’s a bed of rock so steep that we found it difficult to climb, but that mattered little as the bed slanted down to the level of the road. The strata, dipping to the west, are typical of this vicinity. These rocks got caught up and tilted in the deformation associated with ancient mountain building in New England. 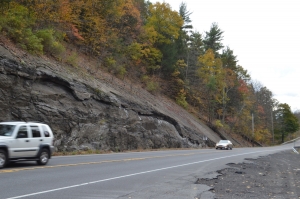 What makes this such a fine exposure is that there is one particular stratum which is expansively exposed. That’s unusual. We geologists spend a lot of time looking at strata in cross section, but we rarely get to see a broad surface like this. Once again, we had become time-travelers; this bit of geology had taken us back in time to the Late Silurian time period. We don’t mean that figuratively, but quite literally; this stratum of sedimentary rock was deposited on the floor of a sunlit shallow sea perhaps 425 million years ago. For a time, it actually was the sea floor and, upon it, grew the seaweeds and crawled the shellfish of the old Silurian age sea.
But time is fleeting, even geological time. Sooner or later (and in geology it really can be later) a sea floor is condemned to be buried. Storms blow up and the winds generate currents which bring new masses of sediment to be spread about. Many of the plants and animals that populated the old sea floor remain, but only as fossils. Layer after layer of sediment piles up and the sea floors of old harden into strata of rock lost in time. That’s what geologists see in cross section when they study layered road outcrops such as most of those on Rte. 9W.
But not all of the strata here have shared that inglorious fate. There is, for example, this one fine stratum. It’s an example of something unusual, an exhumed sea floor. Nature (helped a lot by the highway department) has stripped the overburden off of this old sea floor and exposed it for us to see.
You have, quite likely, been on a boat that cruised above the floor of a shallow sea. It’s a lot of fun; you can look down and observe the marine life going by below. Glass-bottom boats are specifically designed for this. In Florida or the Bahamas, you can’t beat it for a fascinating afternoon. It’s nice that we can do the same thing right here in Ulster County.
Our stratum, along Rte. 9W, can’t quite compete with a glass-bottom boat in the Bahamas. All of the old seaweeds are gone, so too are most of the animals. All those creatures without skeletons or with only delicate skeletons are lost to time. Only those shellfish that had sturdy shells remain, but there are plenty of them. We found quite a few brachiopods, those bivalve shellfish that remind us of clams. They occurred in clusters of specimens, all about the same size. We think that these were what biologists call “spatfalls,” clusters of larval brachiopods that settled here and grew up together. These are “families” of shellfish, if you can imagine such a thing. We found a few clams here as well, but they weren’t common. Finally, we found the weathered and forlorn tail of a trilobite, all that remained of a once fine-looking animal. All in all, what we were looking at was a snapshot of the old Silurian sea floor, just a moment in time, nothing special and maybe that’s why it is special.
Because of its steepness, this old sea floor is difficult to climb around on. If you visit the site, be very careful. One slip and down you go. The fact is, however, that there is no real need to climb up the exposure at all, most all the good things you can see are found at the base of the outcrop. There’s no real need to climb any higher. So do go and see this little natural wonder. You don’t get many opportunities to explore a sea floor, especially one that existed 400 million years ago.
Contact the authors at randjtitus@prodigy.net. Join their facebook page “The Catskill Geologist.”