Pillow Talk
On the Rocks
The Woodstock Times
June 3, 1999
Updated by Robert and Johanna Titus

There is something naturally mysterious about the bottom of the sea. Sea floors are dark, hidden and nearly impossible to get to, so of course they are shrouded in a captivating sort of mystery. But if the bottom of the sea is a puzzle, what about under the bottom of the sea? Who can even guess what goes on beneath the surface of masses of soft sediment lying buried at the bottom of the sea? Nobody, we suppose, and you would wonder who would even care. But things do happen down there and sometimes we geologists get to see the results, left as impressions in the sedimentary rocks. The rocks show deformations which occurred while they were still soft, wet sediments. What caused these deformations? That’s the job of a sedimentologist to figure out. Mind you, we are not trying to build up some great, enormous mystery here. Nothing supernatural lurks down there. In fact, nothing even all that interesting goes on within the sediments. We are just suggesting that, under the pressure of great weight, things happen to soft wet sediment and it’s the nature of we geologists to try to understand what it is.
The problem comes to light where weathering and erosion have cut into sedimentary rock. Road building also does a fine job of slicing cross sections into outcrops and exposing their interesting structures, including the results of deformational processes. We found a good example recently along Rte. 212 at its intersection with Centerville Church Road. Here, long ago, road building cut a number of excellent outcrops, exposing fine cross-sectional views of sedimentary rocks. The rocks belong to the Hamilton Group. They are strata of marine sandstones and shales that were deposited at the bottom of the Catskill Sea during the Devonian time period, nearly 400 million years ago. At the time of deposition these sediments were nothing special, just sands and muds. Today they are still nothing all that special. We looked to see if there were any fossils but found none. There were no special sedimentary structures either, no channel forms, no ripple marks or even the cross bedding of strong currents. It was, for the most part, just a routine outcrop. 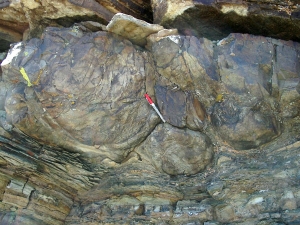 But then something caught our eyes: immediately across the road from a yellow right turn sign we found something called a ball and pillow structure. It’s a mass of sandstone that had become very dramatically deformed while it was still wet. The wet sand had somehow become disturbed and sunk, or foundered into softer muds below, forming a large round-bottomed mass. Because of its rounded structure it has earned its ball and pillow name. Naming something like this is easy, but how did it get here? We can look at these structures all we want to, but we will never figure out exactly how they formed. Rock is sediment “frozen” solid and we cannot replicate the original dynamics. Some sedimentologists, however, have tried to deal with this problem by experimenting with masses of sediment in laboratory tanks and they have duplicated this structure by passing shock waves through them. In nature the best way to induce shock waves in sediments is to have an earthquake. So, are these “fossil earthquakes?” we don’t think anyone knows. But, that’s the way we are betting.

Ball and pillow structures are quite common throughout the Hamilton sandstones. We have seen many of them in many locations. But most of them are rather small; the diameters of the pillows are only a foot or so across. But some are very large and the one on Rte. 212 is about as big as we have ever seen, being three feet, or so, across.