Today let’s wander Cooperstown and visit some of its past. You and we are now the mind’s eye, the human imagination. We are not stuck in one time or place. We can go to any place or any time we desire.
Let’s begin along the shores of Lake Otsego at Lakefront Park. It’s 8:32 AM on the morning of Oct. 12, 21,618 BC. The climate has been very cold for centuries and the landscape of Lake Otsego shows the effects. All along the slopes, east and west of the forests, are dead. Only bare branches are seen where there should be a colorful autumn foliage. The forests are silent. All the birds have flown away, nearly all the insects have died. All fur bearing animals have long ago disappeared. There is no wind this morning and it is so quiet. At the north end of the lake we see the reason for all this. All along the horizon is the image of a great wall of ice. It is the advancing Laurentide Ice Sheet. It rises a few hundred feet above our horizon, but back to the north it is a mile or so in thickness. It extends all the way back to Labrador. At its front two much smaller tongues of ice descend left and right around the hill known as the Sleeping Lion. The sky is gray and very cold. 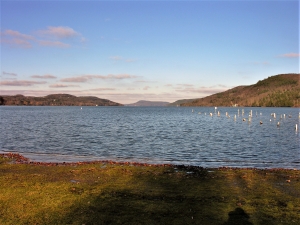 We are the mind’s eye; we wander away from the ice age scene and head over to where Rtes. 80 and 28 head west, out of town. As the highway ascends the hill, it passes through a canyon. “Sandstone walls rise above the road. The rock is stratified; each horizon was once a bed of sand at the bottom of an ocean called the Catskill Sea. We are the mind’s eye; we travel back in time and visit the floor of that ocean.
It is high noon on August 9, 371,493,628 BC. Just enough light reaches the bottom of the sea to look around. There are shellfish down here, but not very many. Some are familiar to us; we know them as clams. Other shellfish are not clams; the symmetry of their shells marks them as something different. These are called brachiopods and they are the most abundant living sea creatures of this, the Devonian time period. Swimming slowly past us are a few clumsy looking fish. They have a heavy armor of bone and are quite unlike modern scale-bearing fish. Above us a small sea monster passes by. It has a coiled shell, fine eyes and a large number of tentacles. Its descendents will include the squid and the octopus but this is the Devonian, and this creature is called a nautiloid; it is the most intelligent animal of the Catskill Sea. The afternoon advances and the sea floor fades into darkness.
Now it is April 3rd, 13,289 BC. Warm climates have returned, and the ice age is ending. In the hills above Cooperstown the remaining glaciers are melting, and a vast rush of water is thundering down the Rte. 80 canyon. So powerful is the flow that it is actually carving the canyon. The currents wash out onto a growing plain of gravel that will eventually make up the whole western half of Cooperstown. The ice age is actually forming this town.
We are the mind’s eye and we return to a Cooperstown in the late autumn of the year 2006 AD. We have only just begun our journeys through time and space.
Contact the authors at randjtitus@prodigy.net, Join their facebook page “The Catskill Geologist.”