We would like to welcome what we hope are a large number of new readers from Palenville. The Mountain Eagle has expanded its coverage to your town. Palenville has an extensive historical heritage. It has been a place where visitors have long begun their ascent into scenic Kaaterskill Clove. Originally a tough trek, nowadays there is a modern highway so the journey is easy. In the 19th Century Palenville became an artist’s colony. Landscape painters of the famed Hudson Valley School of Art commonly spent their summers there and devoted themselves to sketching and painting the area’s scenic landscape. A lot of very good work was done in the vicinity of the clove. Palenville has always seen a great number of tourists passing through on their ways to the mountains.
Let’s visit the town of Palenville as geologists; and, let’s ask a deceptively simple question: why does it exist? The answer takes us back to the Ice Age. Geologists have long been drawn to Kaaterskill clove to view its landscape with a more scientific eye. That’s where we fit into the story. We love to hike the clove and the mountains north and south of it. There is an awful lot of very good geology to be seen there. So, when we got the chance to fly over it, we welcomed the opportunity. We had a pretty good idea of what we would see. Kaaterskill Clove is a great gash in the Catskill Front. Most of it was carved during the Ice Age, especially during the closing phases of that time. Melting glaciers provided enormous amounts of water that cascaded down the canyon, eroding it. Think of it as an oversized gulley! 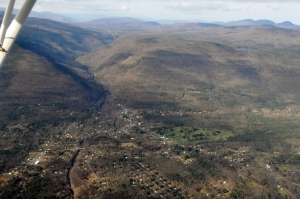 Kaaterskill Clove had been there before our most recent ice age. It probably began eroding at the end of the Ice Age’s previous chapter. But about 13,000 or 14,000 thousand years ago there was another time of melting . . . and another time of erosion. You have to visit the clove and imagine it with deafening masses of raging, foaming, pounding whitewater thundering down its canyon. Erosion would have been going on at an alarming rate. Where there is erosion, the destruction of rock, then there must also be the production of large masses of sediment. Rock is converted into sediment, and it must be deposited somewhere. That is exactly what we were going to see.
Palenville has long been recognized by geologists as something that is called an “alluvial fan.” That is a large, fan-shaped heap of earth. Such fans spread out across a dry valley floor at the bottom of the sediment’s source. In this case, large amounts of sediment traveled down an eroding Kaaterskill Clove, and then spread out into a fan shaped heap at the bottom of that clove
A trained geologist can recognize such a feature on any good topographical map, and we did this a long time ago. But now, we were up in a plane, and there it was. As we flew by, we gazed into the great wide yawning clove. And spread out before it was the alluvial fan. We could recognize three roads that we knew. These were Bogart Road, Rt. 23A, and Rt. 32A. The three of them radiated out from the bottom of the canyon and spread out across the top of the fan. Nobody knew it at the time but, as laid out, those roads all descend the gentle slopes of the alluvial fan. The fan made an ideal location to build homes and, one by one, they appeared. And that is the geological story behind the origins of Palenville.
=================================================================
Reach the authors at randjtitus@prodigy.net and see more at their facebook page “The Catskill Geologist.