Dear Professors Titus: I dug up this unusual rippled rock in my garden. Can you tell me about it? Did it form at the bottom of the sea? Norma Coney, Gilboa. 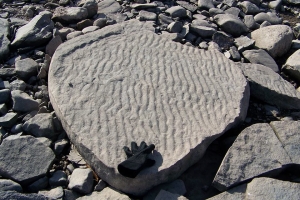 Dear Mrs. Coney: We are glad to have your letter and photo and we are happy to write about these interesting sedimentary structures. They are striking features and they are important. Geologists find them throughout the Catskills and in many other locales as well. They are called ripple marks, but that term does not explain itself very well. Ripple marks can be the product of several processes. They can, indeed, form at the bottom of the sea, but in your case that is not likely. Gilboa was part of the Catskill Delta back during the Devonian time period when your rocks were formed. We need an explanation which does not involve saltwater and we think we can come up with one.
The first process that forms ripple marks is current activity. Currents, moving along the bottom of a body of water, tend to sweep up particles of sand, along with a little silt and clay, and carry them along. If there is a strong current, then the first few inches above the bottom will be dirty with the sediment. The current sculpts the sediment and shapes it into the ripples that we see. You can tell current ripples because they are asymmetric. There is a steep, but short, downstream slope on one side of the ripple. The other side has a lower angle and that side is the longer of the two. Sand grains are swept along and travel up the long, low slope, called the stoss slope. After they kick across the crest of the ripple, they tumble down the short steep slope, which is called the slip slope. The result of all this is an asymmetric ripple, steeper on its slip slope than its stoss side. These are common on the floors of shallow oceans and at the bottoms of rivers. The stronger the current was, the larger they are.
The other process that creates ripple marks is wave activity. Waves are simple looking when you watch them approach a shoreline, but they are actually pretty complex. Inside a wave are masses of water that are traveling in circular orbits. Each drop of water will travel in its orbit as the wave passes by any particular spot. In effect the drop travels forward as it rises up the slope of one side of the orbit and down the other. Then the water drop is, in effect, traveling backwards as it completes the bottom half of its cycle. Watch the second hand on a clock as it travels “forward” toward three o’clock on the upper half of its sweep and “backwards” towards nine o’clock on the lower half of its sweep. The second hand of a clock does a lot of moving but it never gets anywhere.
Similarly, when our drop of water has completed its cycle, it is right back where it started (just as the second hand of our clock passes by 3:00 every minute). The drop of water doesn’t go anywhere, but the motion wave does travel forward through the water. In effect waves are pure motion; the passes through the water, but nothing else actually goes anywhere!
But, even if the water does not go anywhere, a wave can move sediment. The circular motion of water inside a wave, sweeps sand forward and backwards at it passes by. That forward and backward motion sculpts the sand into the second category of ripple marks. These, called wave ripples, are symmetrical. Both sides of the ripple have the same slope and each side covers the same distance.
Wave ripples can also form at the bottom of oceans or on the bottom of any body of fresh water. Because waves are shallow water phenomena, their ripples tend to form in shallow water settings. Wave ripples are especially common along shorelines. Go to a nearby pond or lake and look at the sand along the shore and see if you don’t find some.

Confused? Just remember: asymmetrical means current/ symmetrical means wave. Do watch for these; they are common and fun to find.
Now, as to the ripples in Gilboa, It’s hard to tell from the photo, but they appear to be asymmetric. Thus, we think that these are current ripples. If that is so, then these were probably formed by the currents of a Devonian age river. This was part of the great Catskill Delta, which accumulated the sediments that make up the sedimentary rocks of all the Catskills Mountains.
Contact the authors at randjtitus@prodigy.net, Join their facebook page “The Catskill Geologist,”