It is our habit to walk our country road late at night just to be out. We live on a quiet stretch of Catskill Creek and it is nice here in the evening. We recently started our walk on a dark, humid, moonless night, one that was fragrant with high summer. We wouldn’t see much but we could listen. What we would hear was the past, and not just the recent past.
The forest above Catskill Creek was surprisingly quiet. A few nondescript insects and late-night birds sang in the trees but there really weren’t many of them. There were other creatures however. In the distance, across the creek, a lone “arrooooo” broke the quiet, and it was followed by another call, and then by a cacophony of howls. It was a pack of coyotes. We have been hearing and seeing coyotes a lot more in recent years. Their tracks and scat are very common, so their cries came as no surprise to us.
We have no idea what they were saying, but it was a grand thing to hear. It’s an ancient wilderness sound. Ancestral dogs first evolved about 50 million years ago at a time called the Eocene Epoch. The sounds we heard are probably that old. Our nighttime walk had brought us our first journey into the past, but it was only a short trip compared to what was to come.
As we continued down the road we passed a dark meadow. There was a different sound there. We have no idea what type of bug it was, but there was a steady insect noise, not a hum but more of a steady wheezing sound. It was a signal that we were entering into the very ancient, nocturnal domain of the insects. 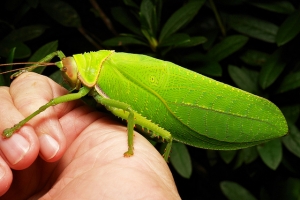 We soon passed under a dark, gloomy canopy of trees. A handful of lightning bugs were still out, but the dark branches above us belonged to the Katydids. They chirped loudly, all were competing for the attentions of prospective mates. Their combined calls created a cacophony of “Katy did, Katy did, Katy did.” Some abbreviated their calls to a quicker “she did, she did, she did.” These were not gossips, just individuals driven by a Darwinian drive to reproduce. This was not music or even musical, but the richness of the sounds on a warm summer night was intoxicating.
Farther along we reached a more open roadway. Above us, we could see the stars. They were bright, having very little other light to compete with. Just a few electric bulbs glittered in our valley. There were a few flashes of lightning from a storm, very far to the north, but mostly it was primeval darkness.
The highlander Katydids had faded into the trees behind us, and they had been replaced by a new sound from the brush below, it was the sound of the lowland crickets. This was a different call, but it had the same Darwinian motive. Crickets are far more melodic and more communal in their calls. They seem to coordinate their chirps. As you walk along you will hear one chirping away. But soon the call from one side of the road will grade, with the same tone and tempo, into the sound of another cricket on the other side of the road. It is as if you had passed from one stereo speaker to another. Why do Katydid’s compete and why do crickets sing in harmony? We are a geologist and a biologist but we don’t know such things, but we do know that both strategies will succeed and next year there will be a new generation of crickets.
Many generations of these singing insects have been around for a long time. They belong to a group called the orthoptera, or straight-winged insects. They appeared probably about 325 million years ago, during the Carboniferous Period and they have been an enormous success ever since. The sounds we were listening to had already been ancient, by the time when the first dinosaurs heard them. And these sounds, though not eternal, will likely be heard for hundreds of millions of years to come.
We continued our nighttime solitude. We soon reached the curve in the road where we customarily end our walk and we sat upon one of the large boulders placed there by the glaciers that once passed this way. We surveyed Catskill Creek in its darkness. There were still occasional flashes of lightning and that storm even managed a little breeze, though it was too distant to bother us.
We sat and listened, mostly in vain, for more sounds. What we had heard was the return of the wilderness in the reforested Catskills. These noisy creatures had been here hundreds of millions of years. Then they were gone and now they are back.
We closed our eyes and now we could not see anything of our modern world. The timelessness of all this became overwhelming. These insect calls were from geological time itself and we had listened. Near us were a few empty beer bottles and a little pile of cigarette butts; We were not the first to sit here. Others come here for other reasons.

Contact the authors at randjtitus@prodigy.com. Join their facebook page “The Catskill Geologist.” Read them in Kaatskill Life and Upstate Life Magazines, along with The Woodstock Times.