Visions of an Ice Age past – Sunset Rock
On the Rocks
The Woodstock Times
August 1, 2013
Robert and Johanna Titus

We have been following the Hudson River Art Trail in our recent “On the Rocks” columns. The Art Trail project has been under the primary sponsorship of Cedar Grove, the Thomas Cole National Historic Site. That’s Thomas Cole’s old home, located near the Rip Van Winkle Bridge in the Village of Catskill. The two of us have been associated with Cedar Grove since its founding, a little more than ten years ago. We have taken great pride in watching as this historic site has blossomed into a center for the study of America’s great landscape art of the 19th Century. Our role in all these columns has been to bring an understanding of the geological history that lies just beneath the surface of those landscapes. This is almost all a story of the Ice Age and we continue that today. We have arrived at site seven on the Art Trail: Sunset Rock. 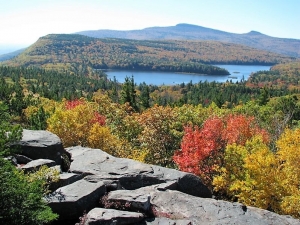 Sunset Rock is a sizable boulder, lying at the top of a sizable ledge of sandstone which overlooks North Lake and one of the Catskills most memorable views. It’s another one of those locations where all the personalities of the Hudson River School came to look and often to paint. Not surprisingly Thomas Cole got there first and, not surprisingly, all of the rest of them followed. We like Cole’s view done in 1843. Jasper Cropsey followed suit in 1855, and we are very fond of the canvas he did there. Our favorite is one done by Sanford Robinson Gifford. You will have no trouble finding these and many more online. 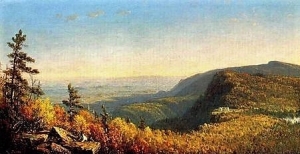 The view here is grand, even by standards set in the Catskills. You stand next to Sunset Rock, or better still, climb up on it and gaze to the south. To your left is the expanse of the Hudson Valley. Out there you can see the Shawangunks as well. More immediately, in front of you are North and South Lakes. South Mountain rises above them. You have to imagine what is lost: The Mountain House Hotel and the Hotel Kaaterskill once were both clearly visible from here. In the far distance you can sense the presence of Kaaterskill Clove far more than actually see it. Above the Clove you can observe both High Peak and Round Top. Hikers come to Sunset Rock at all times of the year and they are always rewarded with a variety of scenic images. Everybody’s favorite season is at the height of the fall colors, but every time of the year pays dividends to the avid hiker. In short, if you have not gone there – you must!
Our very first visit, together, brought us a strong sense of what the glaciers had done to shape this view. Earlier chapters in this series have described the formation of the two lakes down below; this visit will focus on the glaciers descending and flooding in from the north. Are you interested? If so, you are likely to take the yellow trail when you are coming to Sunset Rock. You need to have a sharp eye and you need to know exactly what to look for, but the signs of glaciation are to be found on this trail. What those signs speak of is the immense weight and power of the glaciers that were once here.
You watch the trail carefully and you begin to notice that the sandstones beneath your feet frequently display cobbles, rocks long ago buried with the surrounding Devonian age sands. What happened is that, with the advance of the ice, some of these were literally cut through and planed off. The ice contained a lot of sand at its bottom and the weight of the glacier pressed down on the sand and turned the ice into a sheet of sandpaper. That ground into many of those cobbles and planed them off. What you see today are shiny, flat surfaces at the top of all such cobbles, surfaces that are level with the ground all around. 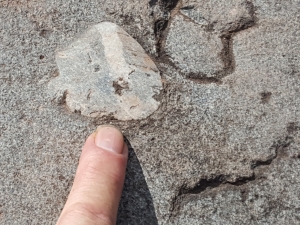 All of this speaks of the advance of a glacier, but there is more: there is Sunset Rock itself. That scenic boulder is what geologists call a glacial erratic. That’s a boulder that was transported within the ice of that same moving glacier. It was picked up, somewhere to the north, and dragged to where it is found today. We have located erratics that appear to have arrived in the Catskills after journeys from as far away as the Adirondack Mountains. This one probably only came a mile or so; it is a local rock type. But it does speak to us of the enormous power of the glacier that brought it here, and it also speaks to us of glaciers that were once this high up in the mountains. That goes to the heart of our story.
Sunset Rock begins its story at a time just as the Ice Age was approaching its peak. We stand there and see thick glaciers filling the Hudson Valley below and then rising up to overflow the very Wall of Manitou, the Catskill Front. The story continues right before us. Glaciers are now advancing out of the Hudson Valley and flooding across the sites of North and South Lakes. Nothing seems able to stop or even slow the rising tide of ice. We watch as South Mountain is first encircled by the glaciers and then entirely submerged by them. Across the valley, the Taconics and Berkshires are disappearing beneath the frozen white, engulfed by the vast swelling of the eastern flank of the Hudson Valley glacier. We turn and look north in time to see more ice advancing south, crossing the crest of North Point. All of the Catskill Front is soon enshrouded in ice. It’s the weight and power of that ice which has produced almost all of the scenery here. It accomplished the planing off of those cobbles and brought that erratic to where it is today. How big and thick was this glacier? We can’t tell for sure, but this ice will not stop rising until it has covered virtually all of the Catskills. Right now, it has another 2,000 feet to go.
But when we stand atop the ledge at Sunset Rock we gaze ahead of us, and our mind’s eyes take us into the another important moment in the past. Now the climate has changed; it has warmed and the ice is melting. We stand upon the great ledge just when the Sunset Rock boulder is emerging from the snow and ice. All the lowlands beyond are still encased in thick ice; both lakes and even South Mountain are still invisible. It’s all a blinding white in the noonday sun.
Nobody ever painted this scene.
Contact the authors at randjtitus@prodigy.net. Join their facebook page “The Catskill Geologist.” Read their articles in the Mountain Eagle and Kaatskill Life.