My candle burns at both ends; it will not last the night; but ah, my foes, and oh, my friends – it gives a lovely light. Edna St. Vincent Millay, 1920

Many, perhaps most, poets are like Edna St. Vincent Millay; they celebrate, and even live, the quick passage and rapid burnout of life. But geologists are different; we appreciate the endless nature of time and the slowness of the changes that it brings. Geologists and poets are alike, however; they both seek out truths that lie just beneath the surface. My wife and I found this out when we visited Poetry Walk, just down the road from “Spindletop,” Millay’s home in Austerlitz. 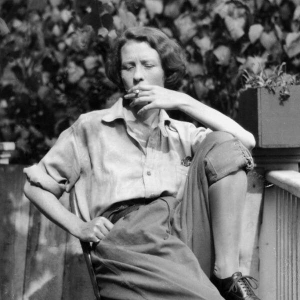 The walk had originally been a farm path, carrying cows and firewood. Vincent (as she rather insisted upon being called) valued the walk for its bird sounds, birch grove and mountain laurels. It came to be even more spiritual when her mother Cora was buried there. Vincent and her husband Eugen Bossevain eventually joined Cora in repose at the end of the trail.
Our walk was a search for the truth beneath the surface. However it was not poetry but rocks that we sought out. As we entered onto the walk we found a cairn of rocks. Proudly placed at its top was a small boulder of pure quartz. It was a strange and beautiful rock and I soon noticed quite a few smaller versions lying along the path. I wondered about this odd lithology. Surely, just beneath my feet, the soils graded into quartz-rich bedrock but what was it? The quartz was associated with other rocks: shards of something called phyllite littered the path too. That’s a dark and thinly layered rock. Its laminations are shiny, folded and crinkled. It starts out as shale and is later quite literally crushed and cooked during mountain building events, and turned, or metamorphosed, into today’s rocks. I found metagraywackes too. These had once been dark sandstones but they too had been cooked into something new. Now I guessed one truth beneath the surface, and my geological map confirmed it. Down there, hidden beneath the soil, was something called the Walloomsac Formation, a thick sequence of phyllites and metagraywackes
There was more; a geologist can deduce much from a few rocks. There may be little poetry to words like phyllite and metagraywacke but there is much meaning. The phyllites were mud before they were shale; the metagraywackes were sand before sandstone. And that mud and sand once lay at the bottom of an abyss, the deepest realms of the deepest oceans. Eventually a great mountain building event did the crushing and cooking.
Was I geologist or poet? I had been metaphysically transported to the darkest and deepest realms of an ancient ocean while mountains rose around me. All the while I was physically standing on a modern forest trail.
The end of the trail brought an end to some of my mysteries. Millay and her husband were buried there and a boulder serves as their gravestone. It is a fine metagraywacke with a large thick seam of quartz running along one side. I looked it over carefully and also found numerous small seams of quartz.
The gravestone was a large piece of the Walloomsac, truth that had been brought to the surface. It had been mud and sand in the depths of an Ordovician age abyss, about 440 million years ago. Those sediments had hardened into rock and then they had been cooked by a mountain building event, probably the one called the Taconic Orogeny. Still later these rocks were fractured and hot groundwater penetrated the cracks. It was then that large and small seams of nearly pure quartz had crystallized and filled the empty space.
Rocks burn their candles only very slowly and only at one end. At Poetry Walk they are turning very slowly into soil and “ah, my foes, and oh, my friends – that gives but little light.”
=============================================================
Reach the authors at randjtitus@prodigy.net Join their facebook page “The Catskill Geologist.”