Woodstock, Aug. 15, 382,439,953 BC, the predawn hours–There is, of course, no Woodstock at this time, but the land is here. It is a morass of bayous and swamps, populated by the primitive trees of the fossil Gilboa forest. It’s the end of a moonless night and it’s still dark out, but there is a growing light and it’s not the approaching sun. Over the past several weeks there has been a slow moving pinpoint of light in the nighttime sky. It is an asteroid, about a half mile across. It’s moving in from the south and, as it enters the thin upper atmosphere, it is starting to glow quite brightly. Its speed is about 20 miles per second, but it is still so far away that it seems to hang in the sky. As it comes closer, however, its apparent motion speeds up. Now as it enters the denser parts of the Earth’s atmosphere, friction heats it into a great flare. The whole western sky lights up, silhouetting the black horizon below.

This is the critical moment; if the asteroid is small enough and its angle of approach low enough, then it will bounce off the atmosphere and skip harmlessly back into space. If not…. The flare’s flight path doesn’t skip, it plummets silently and disappears behind the western horizon.

Moments pass in what seems to be an endless pause, and then comes a great and instantaneous shock of light. It flickers for a few seconds and then the whole northwest horizon glows red. The color brightens to an orange, then a yellow and finally a brilliant radiance of white. An enormous gassy fireball rises rapidly above the horizon to the west, followed by a rising mass of black smoke. This dark cloud rises quickly and it gradually assumes a funnel shape.

Incredibly, this entire scene has been played out during nine seconds of complete silence, but that ends abruptly. The nearby ground begins to hiss and then roar. Great waves of earth radiate across the landscape. They are powerful surface earthquake waves which move very much like the waves of an ocean. As they pass by, geysers of watery sand erupt from the ground. All of the Gilboa trees fall down; their primitive roots are unable to support them on the shaking, soft, wet ground.

In another six seconds the great shock wave of the impact blast itself hits Woodstock. For several minutes the landscape rocks with the combined effect of the earthquake and the atmospheric shock waves. Then, at two minutes after the impact, the actual sound of the asteroid’s impact catches up with the chaos. Only the word “unimaginable” does some justice to the power that this sound signals. 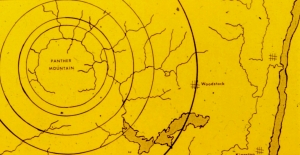 Meanwhile, the great rising fireball has blown a hole in the stratosphere and it continues to rise. It’s a hundred miles high now and the trailing plume of dust below is catching the high sunlight of the still approaching dawn. The whole thing has become an awe-inspiring pillar of white, starkly outlined by the surrounding dark. The pillar is a chimney with walls of dust; its flue is a vacuum which is drawing a vast draft of air upward. Back at Woodstock things had quieted momentarily, but now a new breeze has started and it’s being sucked toward the chimney. It quickly speeds up to gale force and then to hurricane speeds. All this air is drawn up the chimney and vented out into space.

Next comes a hailstorm of dust and rocks. This is the debris that the impact blasted out of the earth and threw tens of thousands of feet up. Now it’s all falling back again. The first rocks plop loudly into the still churning muds. Then the higher-flying rocks start returning as an incredibly dense shower of meteors. Hundreds of them cascade out of the sky and they light up the entire sky.

In the east the sun is about to rise, but it’s a futile effort; sunlight won’t fall again upon Woodstock for months. A great stratospheric shroud of black has been expanding ominously from the west. Along its front an enormous and continuous rage of dry lightning forms an expanding plexus of sparkles that illuminate the wrecked landscape below. Gradually, a moonless, starless black engulfs the area.

But if there is nothing to see, there is still plenty to hear and feel. The winds still howl and more rocks continue to fall out of the sky. And the temperature has been rising alarmingly over the past hour; it is already more than 100 degrees and getting hotter. Once again light penetrates the dusty gloom, but only in the form of burning plant debris falling slowly out of the sooty black sky. To the west, closer to the impact, forests have been ignited and their burning embers have been lofted into the sky. It is a hellish sight.