We went and saw the Jurassic Park movie recently. We happen to be geologists who specialize in paleontology so we thought that it was about time we saw the kind of life that we should be leading. The movie was a lot of fun and there was plenty of action and adventure. There were good-guy paleontologists and bad-guy paleontologists which is an angle we had never reflected upon before. We have enjoyed our own careers in fossils very much so far, but it is clear, from this vicarious experience, that we have missed out on a lot of excitement. Chasing Devonian brachiopods is just not the same as being chased by a Jurassic Tyrannosaurus.

If you see the movie, you may wonder what it was like here in Woodstock back during the Jurassic. The answer is that we don’t know. There are no Jurassic age rocks in this area. No rocks/no history is the way it works in Geology. Nevertheless, it is fair to speculate as to what it was like around here way back then. And, in fact, there are some Jurassic age rocks not all that far away. They can tell us a lot. 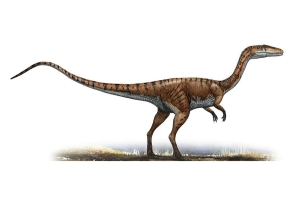 It was the Jurassic and the earlier Triassic times that witnessed the origins and early history of the dinosaurs. In New York State there are late Triassic and early Jurassic sedimentary rocks in Orange and Rockland counties; there are more in central Connecticut. Only a few fossil dinosaur skeletons have been found in these sequences, but the strata are just crawling with footprints. And there is an especially interesting species of dinosaur whose footprints are quite common in these rocks, a dinosaur that almost certainly once lived here in Woodstock. Its Latin name is Coelophysis, and it was a very fine specimen. It belonged to a group called the ostrich-like dinosaurs. Coelophysis wasn’t especially large, being only five feet tall and nine feet in length. It was, however, remarkably athletic. They were agile and lightweight, weighing in at a little more than 100 pounds. It’s probable that they were among the earliest predatory dinosaurs. Coelophysis had small forelimbs, but they were armed with long recurved claws. Its large mouth possessed numerous, knife-like teeth. All in all, the animal would have been quite effective at ripping its prey apart, making it an excellent movie dinosaur.

But that wasn’t the scariest thing about this dinosaur. There are sites in New Mexico where their skeletons are so abundant that paleontologists have speculated that they must have hunted in packs. That really gets us to the Jurassic Park stereotype of dinosaurs as vicious marauders. And there may be a great deal of truth to the stereotype. We once saw a series of dinosaur trackways. They were all the same species, all the same size, they were spread out evenly, and all heading in the same direction – a skirmish line of predatory dinosaurs! We had 15 students place their feet in the tracks and, on signal, they all stepped forward, laughing, growling and retracing those 190 million year old trails. Dinosaurs can be fun, at least the dead ones that can’t eat you are fun.

Coelophysis probably did live here in Woodstock, and dinosaurs are part of our local geological heritage. It’s too bad we can’t go out and hunt their bones here. We don’t know if there ever were any Jurassic age strata in Woodstock, but if so, they would have eroded away millions of years ago. All evidence of local dinosaurs has been gone all that time. Want to see some real dinosaur fossils? Travel to Dinosaur State Park, near Rocky Hill in central Connecticut. There is an outdoor display of footprints there. Maybe one of the dinosaurs that left its footprint in Connecticut came from Woodstock.