What and where is a wind gap?

Sooner or later, every undergraduate geology major takes a course called geomorphology. It is the study of landforms and how they came into being. There are a lot of different landforms on the surface of our planet, and they go by a lot of names, a very large number of names. Do you know what a yardang is? Have you ever heard of a hoodoo? You should know what a drumlin is; we have written about them a number of times. And there are so many more names.

One of the most memorable terms and, at the same time, one of the most memorable landscape features is the “wind gap.” That is the subject of today’s column. What is a wind gap; where and how do they form? The term comes from the town of Wind Gap, Pennsylvania. That’s where the first wind gap was recognized, so that town got the honor of the naming of the feature. But we are not in the business of writing about Pennsylvanian geology; we want to describe a wind gap that is much closer to home.

The story of wind gaps picks up where we left off last week. If you remember that column, then you will recall that a geologist named Rudolf Ruedemann, back in the 1930s, postulated that Pennsylvania’s Lackawanna River once extended far to the northeast from where it is today. Today it is strictly a Pennsylvanian river. But Ruedemann conjectured that, about a hundred million years ago, the Lackawanna extended to the modern course of the East Branch of the Delaware and, from there, on to what is today the drainage basin of the Batavia Kill. 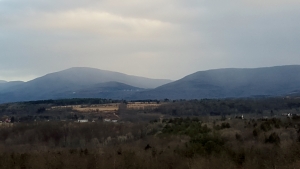 We recounted Ruedemann’s hypothesis, in that column, with some fondness. It is an old idea and it may be out of date, but we like it nonetheless. Well, if Ruedemann was right, then today’s Batavia Kill once flowed southwest as part of a once very much longer Lackawanna River. That is no longer the case. Today, the Batavia Kill indeed flows southwest, but only until it reaches the Schoharie Creek. It is a tributary of the Schoharie, and a small one at that. And it gets worse; in fact, we are not actually talking about the Batavia Kill. Our interest is in a smaller stream, a Batavia Kill tributary that branches off just a little east of Windham and follows Rte. 23 towards East Windham. Get out a good map and you can trace this creek; unfortunately it does not seem to even be large enough to merit its own name. But, even without a name, it may well have quite a heritage.

A hundred million years ago this little tributary might have been a part of Ruedemann’s very sizable Lackawanna River. But only if Ruedemann was right. We can test his hypothesis. If this little creek had once been a part of a larger river then it should have a valley much larger than is proportionate; let’s take a look. You can get an interesting view of this tributary if you take County Rte. 81 east from Rte. 145. At Dingman Road, and for the next mile or so, you can look up at the Catskill Mountain Front and see a cross section profile of the valley of this nameless creek. In fact, technically, it is not a valley at all; no water flows here; our nameless creek picks up a bit to the west; there is no stream right here!

Take a look at our photo. That profile seems big, disproportionately large. Even so, this feature is something that few would even notice. But we imagine that Rudolph Ruedemann did notice it and thought it was important. This is a classic wind gap. If Ruedemann was right then, long ago, the Lackawanna River flowed through this gap. Back then, the river continued back into New England. At that time this site would have been what is called a water gap. Wind gaps don’t have water in them; water gaps do. Ruedemann thought there had once been a powerful stream up there.

Make a visit to this location and look up. When we do, we find that we have traveled back in time to before there was a real Hudson Valley around here.  There is just a piddling unnamed creek now, but the old Lackawanna may have flowed by – up there – at that high level! Then its waters were diverted by the Schoharie Creek and, before that, by the Delaware River. Please take another look at last week’s column.  We can’t be sure if any of this is true, but it sure is interesting.