Fall Vistas – Atop the Hudson River

Updated b Robert and Johanna Titus

Autumn is the season to get out and see the outdoors before it is too late. Winter will be here all too soon and we ought to enjoy ourselves and our landscapes now, while we still can. We are fortunate to live in such a scenic region. There is so much to see. We have, in recent years, added a very fine vista to our Hudson Valley. That is the Cross Hudson Pedestrian Bridge which links the west bank of the river with Poughkeepsie. Officially it is the Walkway over the Hudson State Park, but whatever you would like to call it, it is a marvel.

The bridge was originally built in 1889 as a steel cantilever railroad bridge and it served that way for decades. It was considered an engineering marvel in its day and for a long time it was the only cross Hudson bridge south of Albany.  Use of the bridge declined after 1960 and it closed for railroad traffic in 1974 and lay unused for a quarter of a century. Then in the late 90’s plans were developed to turn it into a pedestrian and bicycle bridge and all that came to fruition in 2003. Since then, it has been open to the public for recreational enjoyment. You can walk from one side to the other and soak in the views of the Hudson Valley to the north and to the south. It’s well worth the effort.

But this is alleged to be a geology column and we are not supposed to be singing songs about bridges, are we? How do we justify all this? Easy. we just had to go and look around. We went down to the west end of the bridge and hiked out onto it a few weeks ago. We brought a camera and resolved to find something we could write about. It didn’t take long. About halfway across we began to take note of a series of relatively small hills on the east side of the river. One was due east of the bridge, right in the heart of Poughkeepsie. Then there were four more arrayed as if in a line, extending off to the north. 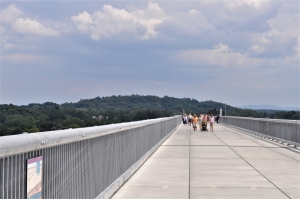 It would have been easy to have not noticed them at all; none of them are all that big. But we quickly guessed that we were looking at a kind of hill that is common farther north in the Hudson Valley. These appeared to be remnants of the Ice Age – hills called drumlins. We have written about drumlins several times before. They are beautiful little hills sculpted by the ice of passing glaciers. They are perfectly symmetrical with steep slopes dipping east and west. The north slopes are also steep, but the south slopes have much more gentle inclines. Drumlins are shaped just like upside down spoon bowls, and they are common, – very, very common throughout much of the Hudson Valley.

When we came home, we dug out our topographic maps and confirmed that these were drumlins. We even found that Dutchess Community College is built upon one of them. One of their academic buildings is even called Drumlin Hall.

It all got more interesting when we continued to study the maps. It seems that these are just about the most southern of all the Hudson Valley drumlins. To the south they just disappear; to the north they become very frequent. Everywhere we looked, these drumlins lay atop all other landscape features. They had to be younger than all other features. That clinched it; we were looking at the record of the one last final advance of the ice. We had been looking at the last gasp of the Ice Age!

Now, in our mind’s eye, we returned to the Cross Hudson Bridge and gazed east. we watched as that glacier moved south. It wasn’t very large and just barely rose above the horizon. Compared with earlier chapters of glaciation, this one was puny. It was near the end of the Ice Age and this small glacier was all that could be managed. But all around us, the Hudson Valley was bleak and baron. This was still very much an ice age landscape.

We watched the glacier advance to the center of what would someday be Poughkeepsie and then it slowed down and ground to a complete halt. This last chapter was running out of steam (or running out of cold?). We continued to watch and then the ice began to melt. It melted away and vacated this part of the Hudson Valley. As the glacier disappeared the drumlins emerged from the ice and took on the appearance that they still display. Contact the authors at randjtitus@prodigy.net. Join their facebook page “The Catskill Geologist.” Read their blogs at “thecatskillgeologist.com.”