THE CATSKILL GEOLOGISTS BY PROFESSORS ROBERT AND JOHANNA TITUS

A Book about the fossil Gilboa Forest

Our Catskills can hardly be portrayed as being a great center for scientific studies; there are no great research universities here, nor any high-powered labs. But these mountains are known all around-the world for one enormously important scientific fact. The Catskills are home to some of the oldest known examples of forest ecologies. We mean not just fossil trees but actual fossilized forest ecologies. Our Catskill Mountains are essentially a petrified delta. It’s called the Catskill Delta from the Devonian time period of about 420 to 360 million years ago. The strata of our mountains, here and there, display patches of what can be called the Gilboa Forest, an assemblage of very early and very primitive trees. With them are the weeds, bugs and fish that lived on the soils and in the rivers of that delta. It is an enormously important record of a critical chapter of evolution, when life was moving out of the oceans and onto the land 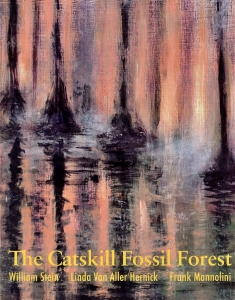 Sadly, the scientific literature about the Gilboa Forest has almost always been written in a nearly impenetrable technical prose. Now, at last., three of the today’s principal researchers have put together a book aimed at introducing the Gilboa Forest to the people of the Catskills: “The Catskill Fossil Forest.” These authors, Binghamton University professor William Stein and State Museum geologists Helen Van Aller Hernick and Frank Mannolini, feel an obligation to the people of the Catskills to explain their science. The book, published by the Gilboa Historical Society Press, is an account of recent studies of fossil forest in Gilboa, Cairo and South Mountain in the eastern Catskills. We learn of the step-by-step uncovering of these three important fossil sites and are introduced to the major categories of fossil trees that were brought to light. The book is brief and extremely well illustrated. It is a most unusual and remarkable effort by professional scientists to explain their work to the local community. It is expected to be introduced at a book signing between 11:00 and 4:00 at the Juried Museum in Gilboa on Sunday. June 12th.

But, while aimed at the general public, this is indeed a book of science. You need to know how to read it. First, this is not a novel; you just don’t start at the front and read through it, cover to cover. In fact, you might begin by spending a fair amount of time looking at the illustrations, especially those of the different fossil trees. Look them over and read the legends. Much of science is communicated through illustrations so you can learn a lot from this. You can also start picking up the Latin terminology and that will prepare you better to read the main text. After all, if you are going to be reading about Pseudosporochnalean and Eospermatopteris trees, then it really helps to have the right images in your mind. And there’s another big plus, you’re going to feel so incredibly smart knowing these words and so many others. All this may be tough at first, but you can do it.

And then there are the insets. The authors have picked out a large number of special subtopics for special readings, separate from the main text. They are important and often quite interesting. Each is a separate bit of education. You should spend time just browsing these.

We strongly recommend this book. If you enjoy our columns, then you will certainly want to learn what is presented in this account. It’s important science. Local science.

It is available at the Gilboa Museum gift shop and at local bookstores. Online at gilboafossils.org/store-home/

Contact the authors at randjtitus@prodigy.net. Join their facebook page The Catskill Geologist. Read their blogs at “thecatskillgeologist.com.”