The Reasons for Seasons

Our Hudson Valley region summers generally bring wonderful weather with dry air and cool nights. Our autumns are spectacular with their foliage. Our winters are dreadful, and once again it is that time of the year. We stoically accept the onset of another cold season and make do with the holidays as some sort of compensation. Few of us, however, know or even wonder why we must endure this annual season. Do you? Some of you might be able to give a reasonably good explanation for our winter season in terms of the Earth’s orbit about the Sun. Many of you, however, might flub the story; it is just a bit complex.

But it really doesn’t matter; We are not interested in the standard astronomical explanation of winter. We would like to consider a deeper reason, in fact, the real reason it is cold out there right now, and that has less to do with the Earth’s orbit than it does with the what’s right above you, or rather, what is not right above you. Read on:

Even if your astronomy is not very good, most of you can probably run through a quick description of the greenhouse effect, it’s one of the leading environmental fears we face today. Briefly, our world’s industries are burning fossil fuels and pumping out large volumes of carbon dioxide into the atmosphere. Carbon dioxide traps solar energy in our atmosphere much the way the glass traps solar energy in a greenhouse. As industrial production of carbon dioxide continues, it may be that the Earth’s climate will warm up with all sorts of unfortunate side effects. Such a fate is sometimes referred to as the “Greenhouse Earth.”

But what if it were the other way around? What if the quantities of carbon dioxide were declining instead of increasing? That gets us to a term which is rarely used – the “Icehouse Earth.” That’s a notion few have been much worried about nowadays, but it actually has happened, and that gets us back to what isn’t above you. In earlier columns we wrote that there were, in the distant past, great mountains towering above our Columbia County region along with most of western New England. These mountains are called, by geologists, the Acadians. They should not be confused with today’s small Taconics and Berkshires; these mountains rose to elevations of tens of thousands of feet and that was right here. That was during the late Devonian time period or about 375 million years ago. 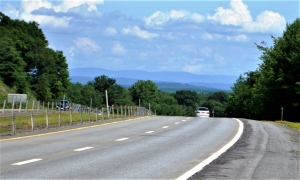 This had been a time when the world was truly a Greenhouse Earth. There was actually 16 times as much carbon dioxide in the Devonian atmosphere as is today. That greenhouse effect must have been enormous; tropical climates prevailed across the planet. But it was not to last. Here in today’s New England, our rising Acadian Mountains were subject to chemical weathering and erosion. Those processes converted the Acadians into sediment which, eventually, hardened into rocks deposited across the rest of New York State. What is critical here is that the processes of chemical weathering consume carbon dioxide; they take it right out of the atmosphere. As the Acadians weathered away, the amounts of carbon dioxide in the atmosphere dropped dramatically, from 16 times as much as today down to merely today’s levels by the end of the Devonian Period, about 350 million years ago. This, as you might guess, resulted in a reversal of the greenhouse effect and quite a cooling of the climate. In fact, there was an early ice age at the end of the Devonian.

There is plenty we don’t understand about this story, but this was a turning point in Earth history. Carbon dioxide would never again be as abundant as it was during the early Devonian. Its levels would rebound again during the age of the dinosaurs and those great hairless monsters certainly must have enjoyed the temporary restoration of the greenhouse warmth. But there simply would never again be so much carbon dioxide, and the climate would slowly deteriorate, with cooling temperatures, especially during the last 60 million years. Some argue that this cold is what caused the extinction of the dinosaurs. There is a good case that can be made for this argument too. Winters, which probably had not been much of a problem during the early Devonian, slowly became longer, colder and more distinct from the rest of the year. Thus, what we know as seasons made their appearance. The process has continued right into our time. In reality, even if industrial pollution continues unabated, ours is a time of an Icehouse Earth. Glaciers in Antarctica and Greenland attest to that.

So, were our old Acadian Mountains responsible for winter? Well, that’s a bit of a stretch, but it is fair to say that the many processes that came to produce and then destroy the Acadians were all part of a climate machine that eventually created the Icehouse Earth climate that we can look forward to for the next three or four months.