Where they sketched: Winslow Homer, “Under the Falls.”

We are endlessly fond of the landscape art done throughout the Catskills by 19th Century painters. Most of them were members of the Hudson River School of Art. Winslow Homer does not belong among those artists. Homer came along just a little too late to be in that School. He started out as a commercial illustrator and, only later, took up oil and watercolor painting. He is best known for his marine subjects, but he did one image in the Catskills that is among our personal favorites. It’s a wood engraving which is kind of an illustrator’s version of a Hudson River School painting. That’s “Under the Falls,” an 1872 picture of Kaaterskill Falls. Take a look at our figure 1. This was originally published in Harper’s Weekly, and copies are commonly found for sale in antique shops and online. 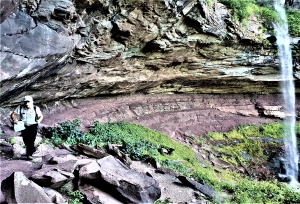 The picture shows something that is sometimes called the “amphitheater,” a great cavity lying directly below the top of upper Kaaterskill Falls. Two attractive and well-dressed young women gaze downstream from a perch on the western side of the falls. In the distance are a number of other hikers. It is a typical summer day in the year 1872 and the falls are a busy place.

We just couldn’t keep ourselves from going there. It was years ago when we first climbed up to where Homer sketched. You can follow in our footsteps and see what we saw. Look at our figure 2; we took it from what we think was Homer’s very spot. That was a slope just above the western side of the falls (our figure 3).

FIG. 3- Slope on distant left is where Homer sketched

But we are geologists, not art historians; what is the geological story here? We look into this image and our focus is on the deepest recess of the “amphitheater.” It lies just below an enormous thickness of sandstone and sandstone is rugged material. See our figures 4 and 5. That’s a brown quartz sandstone above and it’s the stuff of an ancient river channel. 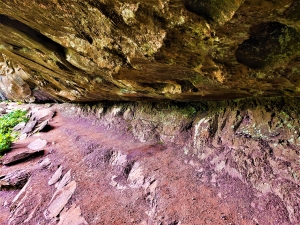 We have gone back to the Devonian time period, about 385 million years ago, and are standing upon a riverbank deep within the great Catskill Delta. Those thick sandstones are now lying before us as the channel sands of a river. It is an enormous river, deep and wide. It had to be in order to accumulate all that sand. We gaze east and we see, in the distance, the river’s opposite bank. Standing, all around us and on that distant shore, is a forest of primitive trees. That’s the famed Gilboa Forest. Evolution has only recently produced forests, and none of the trees we see here even remotely resemble those of our modern world. Below these trees we spy a brick red soil. Our modern-day selves look at the falls and peer at the brick red sedimentary rocks that make up the lower part of the amphitheater. See our figure 5. Then we look up again at the river sandstones. Our journey into the past has been a fruitful one; now, in a scientific flash, we understand the geology of Kaaterskill Falls, especially its amphitheater. 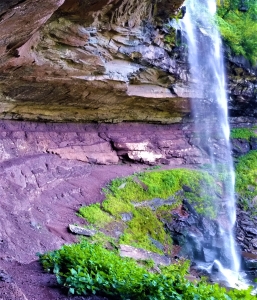 It was all those millions of year ago that a great river flowed across a delta that was large enough to rival the Mississippi Delta. Let’s call our stream the Kaaterskill River. It had a powerful flow and that caused it to erode into its banks as it migrated back and forth across the floodplain. Geologists actually prefer to use the verb meander. This meandering stream cut its way through the red soils and muds of its own floodplain. As the Kaaterskill River migrated off to the west, it left a channel filled with brown sands lying upon a sequence of red soils. All this would eventually harden into the rocks of Kaaterskill Falls. Again, see our figures 4 and 5. Those red soil deposits erode easily while the river sandstones resist and for jutting ledges. That is the origin of the amphitheater and Winslow Homer’s art.

We had been privileged to sit where Homer sat and to see what he had seen, But, for us, there was actually so much more.