This winter’s weather news from Texas has been horrendous and we are sure you have heard about it. The temperatures went down to as low as 9 degrees overnight in the Houston area. It snowed, pipes burst, and food and water shortages resulted. The cold has been called historic and it was. We have a child and two grandchildren down there, so this was a real concern.

Why? We think there is something going on that you need to understand. What happened in Texas has occurred up here as well; it’s just that we don’t notice it so much. It all began with global warming and its effect on the jet stream. Decades ago, when global warming was still just hypothesis, that hypothesis predicted that polar regions would warm up a lot more than temperate regions. Northern Alaska would warm up a lot more than New York State. It has. The Arctic has become not nearly so much colder than lower latitudes. Importantly, the temperature boundary between Arctic and temperate climes has blurred.

That led to results that had not been anticipated; the jet stream was affected. We hope you know that the jet stream is a flow of air that undulates up and down as it continuously flows from west to east. See our diagram. This brings us a lot of our weather, especially winter storms. Historically, the jet stream has been a relatively gentle up and down undulation. See the blue dashed wavy line on our diagram. That is best developed when the contrast between cold Arctic and warmer temperate warm is sharpest. 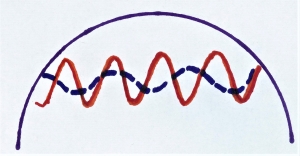 But when the Arctic warms up the jet stream is altered. The up and down undulations become shorter and steeper; they become more pronounced. See the red solid wavy line on our diagram. Their west to east motions also slow down considerably. All this can have a dramatic effect on climate and weather. The down undulations contain the coldest air. When those jet stream undulations spread to the far south, they can bring unusual, even historically cold air into a region where that is not typical. Then because of the slow movement, that cold can stay put on a region for a prolonged period of time. That’s what has been happening to Texas this winter.

Well, these undulations pass through the Catskills too. You will hear each one described as an Arctic vortex. But, up here, we just do not see them as historic events. But this was a very serious event in Texas. We think you should be watching the jet stream diagrams on your local TV forecasts. You can also probably find a webpage that will keep you up to date on the jet stream. You may come to better understand what is happening. And that’s, after all, what our column is all about.