Woodstock in the Ice Age; South by Southwest

We and many of our colleagues practice an art that doesn’t have a formal name. It should go by the name “rockcraft,” but to our knowledge that word is never used. Rockcraft must be related to woodcraft, both are outdoorsy pursuits. A person who practices woodcraft is familiar with camping out, especially in the wilderness. They know the plants and the animals and know how to read the signs and the seasons. They are well-versed in outdoors survival skills, mostly through experience.

People who know their rockcraft, are similarly experienced. After years of outdoors study, they know how to read the signs of the rocks. They are alert to what the rocks have to tell them. Rockcraft is a less known skill; there are no b\ Boy Scout merit badges in rockcraft. Also, rockcraft is not likely to help you survive if you are lost in the wilderness. But it is a very rewarding skill, simply for the understanding of what nature has to tell you about its distant past. In a way rockcraft is what this column is all about.

One of our personal favorite aspects of rockcraft is the pursuit of glaciers. Of course, there are no glaciers in this area and there have been none for about 14,000 years, but there once were and they can still be followed. The main thing to watch for in pursuing a glacier is the glacial striation. Advancing glaciers are likely to bulldoze away all or most of the soils that they overrun. having stripped the landscape down to bare rock, the ice scrapes across it. If, as is highly likely, the ice is carrying cobbles and boulders with it, then those rocks will gouge scratches into the bedrock as they are dragged along. This is the origin of glacial striations, among the most commonly seen ice age features.

If you know where to look, striations can be quite commonplace. Naturally any time you see bare bedrock, it is worth taking a look. We always watch for roadside outcrops. It is commonly the case that after the highway construction has cut into the bank, erosion will sweep the rocks clean and expose the striations. We also watch the tops of ledges; they are so common throughout the region and often reward us with striations. Then there are the tops of cliffs along the Catskill Front. We have found them at the top of Overlook Mountain and all along the escarpment trail.

Naturally, the striations will be aligned according to the direction of movement of the ice. So, when we find them, we can take a compass reading and when we have collected enough such readings in an area, we will be able to document the history of the flow of ice.

During the ice age, glaciers expanded out of northern Canada and drove their way into the northern United States, including the Hudson Valley. We can trace the path of that ice as it passed through this area. What you do is go out and watch for those glacial striations. We have been doing this for quite some time now and we think that we have collected enough data to form a firm opinion of which way the ice flowed.

And we found absolutely no surprises. The ice, here in the Hudson Valley, was funneled through the valley. The striations almost always line up close to a compass direction of south 30 degrees west. It’s sort of a chicken and egg issue here. The structure of the bedrock geology first dictated the alignment of the valley and steered the glaciers. But then, the glaciers scraped and eroded the valley as they passed through it. In so doing they enhanced the southwest lineation of the valley by straightening and steepening the great wall of the Catskill Front. 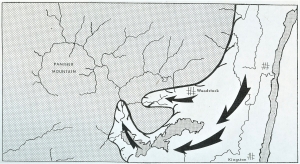 Even if there were no surprises in what we found, it was still nice to have good documentation of the flow of the ice and to further demonstrate the relationship between the Wall of Manitou and the glaciers that once flowed past it.