Retreat of the sea

On the rocks, The Woodstock Times.

Charles Darwin’s great theory is based upon two of the fundamental concepts of geology: first, the Earth is a very, very old, very slowly changing place and, second the fossil record has been gradually changing throughout all that vast length of time, with primitive creatures coming first and more advanced forms coming later.

We have been journeying down the Glasco Turnpike with the intent of testing these notions to see if Darwin was right. If he was right, then our explorations into the distant past should bring us to very different images of the Woodstock region from that which we know today. We should find a fossil record which reveals very different plants and animals from those of today’s Ulster County.

So far, so good: these rocks are a little less than 400 million years old, and they speak to us of a slowly changing Ulster County. Our first stop brought us to the shallow tropical seas of the Helderberg Limestone. We saw bedrock composed of lithified sedimentary limestone that had accumulated on the floor of something very much like today’s Bahamas. Our second stop, at the Bridge that crosses the Esopus Creek, at the eastern end of the Glasco Turnpike, showed us the same ocean after it had become much deeper and very stagnant.

Our journey, today, has taken us west to just across the Plattekill Creek. Towering above the highway is an almost magnificent outcrop. It rises a hundred feet or more above the Plattekill. The lower half of the outcrop is composed of very dark shale. Above that are a number of lighter colored, thick strata. All these strata belong to something called the Mount Marion Formation, which makes a lot of sense as that mountain rises above us at this site. This thick sequence speaks to us of a very important chapter in the history of the Woodstock region. 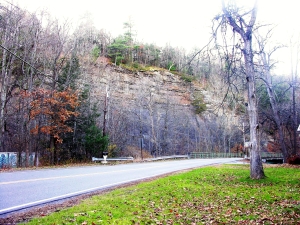 Those black shale beds, at the bottom of the outcrop, tell us about the moderately deep water, very quiet sea that was once here. Try to imagine a very dark, very still sea bottom. Current activity is rare, so silt and clay particles have no trouble settling to the bottom. That’s the stuff that has hardened into the dark shale. There was nearly no oxygen in the sediment and that is why it is so dark. Black is the color of carbon-rich biologic material which is all that is left of most of the few animals that once lived here. Oxygen, in the sediment, would have destroyed that dark stuff and bleached the rock, but there just wasn’t very much of it.

That absence of oxygen was important. It was too deep and dark for any plants, so they didn’t make any. It was too quiet for currents to sweep oxygen downwards from the air above so, all in all, this was nearly an oxygen-free habitat. That’s likely why fossil shellfish are so uncommon here; I remember finding a few ten years ago when I last searched this location, but I found none this time.

How deep is deep would be a fair question. But we geologists get really evasive when asked that one. It is not easy to come up with a good estimate. We would guess a few hundred feet, but another geologist might come up with a very different “guestimate.” We don’t know!

It’s the upper half of the outcrop where things get a lot more interesting. If you look up there carefully you will see a number of much thicker strata. We weren’t ready to scale these heights, but we strongly suspect that these beds are thick sandstones. Usually this is the product of moments of depositional excitement. Something, probably a major storm, stirred up the old seafloor and transported large quantities of sand far enough offshore to get here. After this curious event, things settled down and more dark shale was deposited.

The fact that these sand beds are found only in the upper half of the exposure suggests strongly that this was a shallowing sea and that the shallowing was associated with an advancing shoreline. As the shoreline approached and the waters shallowed, it became easier for storms to stir things up here and to form those strata of sand. We call such a shallowing sequence a “regression.” The sea was literally draining away.

We are not used to seeing regressions in modern times. The glaciers have been melting and, worldwide, the pattern has been one of rising seas over the past 10,000 years or so. We live in a time of transgression and that just, to us, seems to be normal. But, in the distant past, things were often different. Earth history presents us with as many regressions as transgressions. In the Glasco Turnpike is showing us one of them.

Reach the authors at randjtjtitus@prodigy.com. Join their facebook page “thecatskillgeologist.”