We would like to resume some columns in a series that we have called “Cabin Tales.” We have spent a lot of time at the little red cabin at the top of Plattekill Clove, owned and loaned out by the Catskill Center for Conservation and Development. As something of an experiment, we have been writing about geological topics that we discovered within a mile of the cabin. We wondered just how many we could find. How rich is the geology there? The answer is very rich. Here is another episode.

We headed east from the cabin, down the highway, early one morning with nothing particular in mind. But we didn’t get very far before we made a discovery. There, at the absolutely highest crest of the hill, and alongside the road, was a beautifully rounded, fist sized cobble. We looked around and soon found another. Then, in the course of a few minutes, we found several more. We knew what these were; they were stream washed cobbles. Long ago they had traveled down some rugged whitewater creek and over a period of time Nature had done her lapidary work; the cobbles, once angular, came to be sculpted into the sinuous roundness we were admiring. None of these were perfect spheres, but all displayed, to one extent or another, a good deal of rounding. 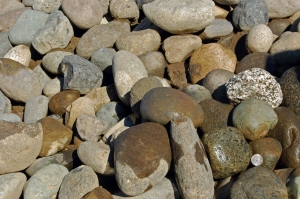 But what were stream-rounded cobbles doing at the very top of the highest level of the highway, far from, and above any stream? There never could have been a stream up here. Well, we knew the answer to that question too and we will reveal it later on, but we had the good sense to appreciate that we had just experienced one of the great geological questions of the early 19th Century. We had, intellectually, been transported back to the boundaries of science as they were before the 1820’s!

Way back then, geology was on the front lines of science; this science was making many of its greatest breakthroughs; it was becoming modern. Our forebears were a sharp eyed lot. They looked, and they noticed, and they saw the same sorts of things that we do today, but they were doing it for the first times – including seeing stream rounded cobbles away from any streams. But they often were quite different from modern geologists; they made their observations from the point of view of a very different mindset. Many, probably most, were devout Christians.

If you are a very religious scientist, before 1820, and you are looking at stream rounded cobbles, lying where they should not be, then there is a very appealing interpretation – these could be cobbles left over from Noah’s Flood!

Ou find, at the top of Plattekill Clove, is not an uncommon one. If you are careful and watchful, you will likely find rounded cobbles all over the place, including many found very great distances from any stream. Lots of geologists were finding these back in the early 19th Century and they eagerly made the Noah’s Flood interpretation. And this included some of the most respected geologists of the time. The one we think of first was Benjamin Silliman, a professor of geology at Yale. Silliman enthusiastically argued for the Noah’s Flood hypothesis all during the 1810’s. Such geologists thought that their views and, in fact, the views of science in general would and should confirm Christian theologies. They certainly did not see science as a servant of religion; it just never occurred to them that there ever should be a conflict. Science would reveal the mind of God, just as the Bible had. The science of nature was thought to be a second testament. There had been a Noah’s Flood; most did not doubt that. If God had revealed the flood in the Bible, then surely, he would have revealed it in the geology. So surely there was a global geological record of that flood. You can imagine how thrilled they must have been to see the rounded cobbles such as we have been speaking of.

But slowly an alternative hypothesis was being developed. During the 1820’s the climate was warming up as the world emerged from something called the Little Ice Age. In Switzerland glaciers were actively melting and the landscapes revealed by the retreating ice showed features that, without any doubt, were the product of those glaciers. And those features included a lot of stream rounded cobbles.

Evidence of a great Ice Age began to emerge, and it was soon clear that almost all of northern Europe and northern North America had been glaciated. As the glaciers advanced and retreated there was a lot of meltwater streams, all producing rounded cobbles. Renewed cycles of glaciation saw glaciers picking up those cobbles and transporting them all over the place. Now there was a perfectly logical explanation for the widespread distribution of stream rounded cobbles, and it had nothing to do with Noah’s Flood.

Ou second moral has to do with “intelligent design” advocates who argue that there should be a place for the supernatural in science, specifically that we should find a place for God in science. The answer to that is that there was a chapter in the history of science when we did exactly that; we searched for the works of God in the science we were uncovering.  But when we did so, it just did not work very well. We do so much better when we search for and find natural explanations for the natural phenomenon we study.

Ou walk down the canyon at Plattekill Clove had carried us through some important moments in the very history of science, a remarkable traverse.

Contact the authors at randjtitus@prodigy.net. Join their facebook page “The Catskill Geologist.”  Read their blogs at “thecatskillgeologist.com.”