Visions of a distant past, Pt. two –“From the Mountain House Ledge.”

Certainly, one of the very most historical sites and all of the Catskills is the Mountain House Ledge at North/South Lake State Park. We are betting that most of you have been there. It’s a grand, broad ledge of sandstone, jutting out 2,000 feet above the floor of the Hudson Valley. It’s claimed that you can view some 70 miles of that valley from this site. It is, of course, the very place chosen for the building of the Catskill Mountain House in the 1820’s. That was the grandest of the grand hotels of the Catskills during the Catskill’s most fashionable era. Back then a Gilded Age aristocracy visited the site and its hotel. A Who’s Who of the American elite spent time here. But something spiritual happened here too. America came to love nature at this location. It was here that the Hudson Valley school of art was born, when Thomas Cole spent a summer sketching the scenery. Almost equally distinguished was the poetry and prose that was inspired by this “sublime” landscape. 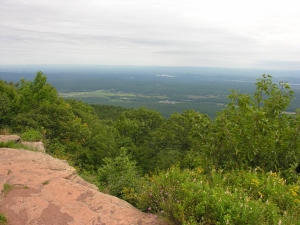 There is no way to overestimate the historical heritage of these few acres of land. The whole culture that we equate with the word Catskills had its birth on the Mountain House Ledge. It is one of our favorite places to visit and we have begun any number of geology field trips and walks right there. But we frequently like to go there by ourselves and sit upon the rocks at the rim of the ledge. We touch the sandstone and look around. All that lies above the ground, above those rocks, belongs to history. Here Roland Van Zandt and Alf Evers prevail. They explored the history of this site and recorded its many influences on our culture.

But we touch those rocks again. Everything from the ground down belongs to us! All around is the historical heritage of culture in the Catskills; below is a geological past that reaches back hundreds of millions of years. More than a mile of sedimentary rock lies beneath us, and every stratum has its own history, from its own time. We touch this ledge and contemplate its petrified sand. It accumulated on the floor of a river channel. That was during the Devonian time period, about 375 million years ago. A river flowed by, right here, and then it disappeared off to the west. We gaze that way and then turn around and look, more intently, eastward hoping to see where that stream and its sand came from. But . . . there’s nothing there but the great emptiness of the valley.

For us, suddenly, it is the Devonian; we sit just above the stream in the middle of the flow, looking east. To our left and right are the low banks of the river. Rising above them are trees, at least they must be trees; they are so exotic, so strange in appearance. Frail looking trunks rise 20 feet above the banks. There are no branches, not until the very top is there even any foliage. And this defies all efforts at description. There are no leaves, just something that might be called fronds. But even that term does not suffice. These are among the most primitive “trees” known to history. They represent evolution’s earliest efforts at the very concept of a tree and evolution is not yet very good at that. Their “foliage” defies description because nothing like it grows green today.

We look again to the east, but we cannot see very far; the scenery blocks our view.  We are the mind’s eye; we can go anywhere and do anything the human imagination can conceive. We rise up into the Devonian air and from a new high perch, we can again look east, this time actually surveying what is there.  Before us, and rising miles into the sky, are the slopes of a great mountain range. These are the Acadian Mountains, and, during the Devonian, they rose as high as the Himalayas of today. Between those mountains and us lies an expanse of green; this is the first and the oldest forest in the history of our planet.

Beyond, the greenery thins out as the lower slopes of the Acadians rise up. Evolution has not yet brought forests to anything but the lowest of elevations. These Acadian foothills are thus bare of trees; only brick red slopes are seen. These are nearly devoid of life. Above, it only gets worse. The middle slopes of the Acadians are gun metal blue. They are cut by deep and jagged canyons and ravines. These speak of moments when intense rainfall has resulted in terrible episodes of unrestrained erosion. Up there, no roots are found to slow the powerful effects of eroding torrents. This is the genesis of all the sediment that composes, in modern times, that mile of sedimentary rock which we call the Catskill Mountains.

We gaze still higher up. These are great mountains, and the distant images of high elevations are not as clear. Those high slopes are gray, and they too seem to be cut by more gulches, gullies, and defiles. Then, abruptly, there is a perfectly horizontal and sudden transition to a pure brilliant white. This is the snow line. These are the tropics, but those elevations are so high that snow lasts throughout the year.  At the top of the Acadians lies an icy and jagged skyline. Pointed peaks gleam white above.

We are the mind’s eye and our journey into the past is a grand experience, but we cannot stay for long. This image of the ancient Acadians is a fleeting one; it blurs and then fades. We stand, once again, looking east across the Hudson Valley. Beneath us is that mile of sedimentary rock; before us is the memory of the mighty mountain range that, long ago, eroded away to make these Catskills.  Only the low Taconics remain.

Reach the authors at randjtitus@prodigy.ney. Join their facebook page at “The Catskill Geologist.”