The Hudson River School of Rocks

Some years ago, Robert attended the national meeting of the Geological Society of America and was surprised to see an agenda with three papers that were devoted to the Hudson River School of Art. Getting papers accepted at the national meeting is a very competitive process so he was surprised that the meeting’s organizers would devote so much time to art. What did not surprise him was that it was this particular sort of art. But we bet that this is a bit of a surprise in an artistic community such as Woodstock so let us try to explain.

Thomas Cole, one of the founders of the Hudson Valley School, got his start here in the Catskills. It was 1825 and he was probably the first painter to get up to the newly opened Catskill Mountain House Hotel. Before him, up there, lay nearly all of the Hudson Valley and behind him were all of the Catskills. It was the Catskill landscape that attracted him the most. This great landscape was still largely wilderness and the young artist would be the first to explore its scenic opportunities. 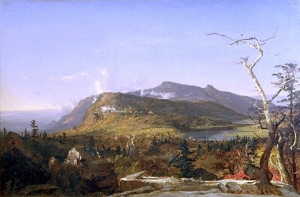 Our mountains would bring Cole quick success, but he did have one problem: back then the great traditions of landscape art came from Europe, and it was the custom of European artists to use the ruins of Classical cultures as emblems of antiquity. They liked to stick in the remnants of a Roman temple or two in order to communicate that their landscapes were truly old. Obviously, Cole could not do this, after all very few Romans ever got to North America during Classical times.

Then again, and this is where we geologists come in, Cole was working at a time when geologists were revolutionizing the very concept of time itself. In 18th or early 19th Century Europe, a Classical ruin was seen as dating back to near the beginning of time, especially if you accepted a biblical age of 6,000 years for the age of the Earth. But by the 1820’s geologists had come to understand that the Earth was probably many millions of years old and, indeed, very likely much more than that (billions, in fact). A two-thousand-year-old ruin didn’t look very old given the new framework of time!

Without ancient monuments, Cole struggled to find native emblems of antiquity. He tried the figure of an Indian in his famous painting of Kaaterskill Falls, and that sort of worked. Cole used the tangled chaos of the American wilderness as another approach. Our wilds had a venerable, tangled and mossy look to them when compared to the tamed, park-like landscapes of Europe. But it wasn’t until the 1830’s that Cole found another solution: the very rocks themselves.

It’s in his “Course of Empire” that we find Cole using this solution. Course of Empire is his famous series of five landscapes each showing a stage in the history of a mythological Classical empire. The first painting showed that culture’s roots in a primitive tribal culture. Later (second painting), it passed into a stone-monolith- building second stage, and from there blossomed into a Rome-like empire (third painting). Sadly, Cole’s Empire disintegrated in war (fourth painting) and fell into ruin in the last scene. Throughout the five canvases a great somber mountaintop of rock loomed above the community. And throughout the long history that mountaintop never changed one bit, it was permanent while all below eventually disintegrated. In this way Cole turned the tables on European painters: Classical cultures were recent and ephemeral while the rocks beneath were the true emblems of time.

That was a pretty heady theme in the 1830’s and 40’s, when Cole was most active. And that same heady theme was central to the geological community of the very same age. We geologists were looking at rocks exactly the same way as Cole and his colleagues; for a moment of time Art and Geology explored the same literal and intellectual landscapes.

Art is ever-changing, and of course, it has moved on. But the notion of great antiquity remains fundamental to geology and geologists integrate it into all of our thinking. Thus, it really is no surprise at all that we geologists still venerate the great Hudson Valley School of Art. Those paintings speak to us in a very personal way.