Fire and Ice at Overlook

The fire tower atop Overlook Mountain is now open to the public, and this is the first autumn that you can legally and safely climb to its top. Sadly, we know that many of you have never even been to the top of Overlook, let alone enjoyed the view from the top of the tower. It’s about time. 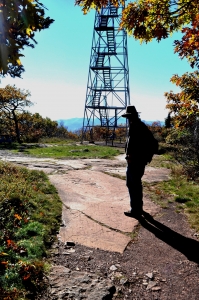 The climb to the top is a moderately long one, but it is not all that difficult. There are no cliffs to climb, just a long steady incline. Even if you are not in good shape, you can make the ascent. You will know you have almost gotten there when you see the ruins of the old Overlook Hotel. They’re worth the trip by themselves. Past the hotel, bear right and walk along the edge of the escarpment, the view is grand. Farther along, you reach a substantial topographic shelf right on the mountain edge. This location is favored by campers and is especially busy on nights of the full moon.

Eventually you will want to complete the ascent and go to the fire tower. The tower sits upon a bare, windblown knob of bedrock. The tan sandstones have a venerable history. They were the deposits of the Catskill Delta. We are not entirely sure of the exact origin of these rocks, but many geologists argue that they were the sediments of meandering streams, flowing across the old Catskill Delta. That’s what may have been here. Or maybe not; one is never sure with rocks that are nearly 400 million years old. They are not my real story today, anyway.

The story that we are sure of is about the glaciers that were once here. Right on the trail, just as you make your absolutely final approach to the fire tower, is a very fine example of a glacially polished bedrock surface. The passing ice sanded the rock into its smooth form. Upon that surface are some very fine examples of glacial striations. Striations are long straight scratches that were gouged into the rock as passing glaciers dragged rocks and boulders across the bedrock. Along with the striations are some chatter marks. These crescent-shaped gouges are the products of boulders that sort of skipped across the bedrock as they were being shoved by the moving ice. It must have taken the pressure of a very thick glacier to perform all this damage. A very thick glacier indeed, and that’s where the story gets interesting.

The Overlook striations have a compass direction of south 30 degrees west. We are very familiar with that orientation. We find it at the top of many of the Catskill peaks. This marks the path of the great Wisconsin ice sheet as it passed across the Catskills and advanced toward Long Island, New Jersey and Pennsylvania. This was an enormous sheet of ice, comparable and maybe bigger than the ice sheet of Antarctica itself. If you climb the fire tower, spend a moment contemplating what was once here. The entire landscape all around you was submerged in ice. It is an incredible image, one we never can quite fathom ourselves, even after decades of studying such things.

Just how deep was the ice? Remember those striations, it took the weight of a lot of ice to make them. How thick was it? Well, late at night in geology bars, we argue and debate such things, but we never do come to any final conclusions. Many geologists believe that all of the Catskills were under the ice, others argue that the highest peaks escaped the reach of the glaciers. One thing is for certain however, at least a thousand feet of ice lay above the top of the Overlook fire tower. Look around at the adjacent peaks and then gaze upwards those thousand feet or so and think about all that for a moment. Up there, there once was a great arctic plain, a vast, flat, white waste. Temperatures must have averaged many degrees below zero and winds must have blown snow about constantly. Next, look down to the floor of the Hudson Valley nearly 3,000 feet below. Fill in all this space with ice and then extend it south to Long Island and north to beyond the pole. If you can imagine such a thing, then you are beginning to appreciate just what an event the great ice age was. And it may have happened more than once. We found a second set of striations at a compass direction of west 20 south. It seems glaciers overtopped Overlook at least two times.

Today you would have to go to the south pole to encounter such a landscape. But, if you make yourself a geologist, even just for a day, you can travel to such a landscape today. It’s up there at the top of Overlook and they throw in a fine autumn landscape for free. Many people worked long and hard to open up that tower, go and enjoy it.