Laurels for a Great Big Rock

June is the time to visit North Lake State Park. If you have not been there, North Lake is one of the gems of the New York State park system. There’s not one, but two gorgeous lakes (The other one?  . . .South Lake, of course). More than that, there are several miles of trails running along the great Catskill escarpment. Anywhere along the escarpment trail you can see a grand view of about 70 miles of the Hudson Valley. Beyond that, there are more trails into the woods and up into the mountains.

If you don’t like hiking then you can camp, swim, or picnic.

The park has recently opened for the new season (1998) and among the real draws is the Mountain-laurel which is, right now, in flower. But, year-round, scenery has always been the major attraction at North Lake. Thomas Cole came here in the 1820’s and the canvases he did here helped found the Hudson Valley school of art. The Catskill Mountain House Hotel was, for quite some time, the premier summer resort of America. It was right above the two lakes. 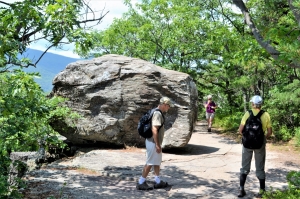 But our main attraction at North Lake has been the rocks and there are some very good ones here. Let’s go look at one of the best. Enter the park (they charge admission by the carload) and drive all the way to North Lake itself and park. Hike south toward the Catskill Mountain House site (follow signs for the hotel site and the blue trail). The hotel is long gone, but the site is still a clear field with a great cliff and magnificent view. You can see the Hudson River and the Taconic Mountains beyond. If you know where to look, you can see the town of Catskill, Frederick Church’s mansion, Olana, and many other sites of the Hudson Valley.

The hotel was pretty expensive so enjoy the view; a century ago you probably couldn’t afford it! Find the signs for the blue trail and follow them up the hill. You will ascend a couple of hundred feet in elevation, and quite steeply at first. Eventually the trail will level out upon one of those great ledges that are so typical of the Catskill Front. Here and there, you will find more vantage points. In June, however, it is the Mountain-laurel that you may want to see; they are at their best now. Soon the trail branches. Follow the signs and take the left branch toward “Boulder Rock.” It isn’t far.

It’s an odd name, but a good one; Boulder Rock is an enormous rock. You can’t miss it; it’s just to the left of the trail. What’s perhaps most remarkable about it is that it is perched right on the edge of the cliff. Yawning out before the boulder is a steep 2,000-foot drop. And if it had been any smaller it would have been pushed over the edge. Alf Evers records that virtually all such boulders, that were small enough and close enough to the edge, did meet such a fate. But this one is much too big for even a small army of very brawny men to dislocate.

So fine, now we know why it is still there, but how did such a boulder get there in the first place? The answer is easy, and it is a good one. Boulder Rock is called by geologists a “glacial erratic.” Our story takes us back about 14,000 years ago to when the last glacier was advancing down the Hudson Valley. The ice age was ending, but ice was still active in the valley. Glaciers are currents of moving ice and they can pick up and move almost anything they want to, including very large boulders. Boulder Rock was swept up in the flow of ice and carried here. The ice then melted and left the boulder behind.

This is commonplace; many displaced boulders are found throughout glaciated regions. We call them erratics because their lithologies do not match the local bedrock. Boulder Rock isn’t all that erratic, however, it probably came from North Mountain, only a few miles away.

Please do make the trip, especially if you have not been to the park before. When you reach Boulder Rock try to imagine it as it was long ago. Imagine the valley before you filled with old gray ice. The ice is melting and wet with pools of water. Up here, water is pouring off the ice and Boulder Rock itself is just emerging from its white shroud. All around, the landscape is still pretty bleak. It will be quite a while before this area recovers from its glaciation, but when it does recover, it will have done it very well indeed.