The mouth of the Susquehanna is, of course, right here in Cooperstown. You can see much of it from the bridge on Main Street. It’s a lovely canyon and it is most remarkable to contemplate that, from this little stretch of water, the Susquehanna River begins its journey of hundreds of miles. 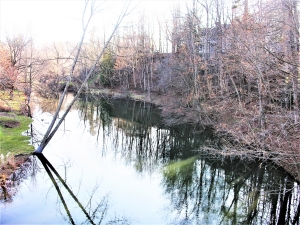 But there is also an ice age story to be found here. Take a good look around sometime. All along the lake’s south shore the landscape rises relatively steeply. It reaches elevations of several tens of feet or so above the level of Lake Otsego. If you think about it, the shore of the lake here, except for that one notch, would make a pretty fine dam for a much deeper and larger Lake Otsego. Such a dam is, in fact, exactly what was once here.
Lake Otsego is a gift of the Ice Age. It’s a junior partner of the more famous Finger Lakes and it formed exactly as those larger lakes formed. Roughly 14,000 years ago, give or take, the many valleys of central New York were occupied by what might be called valley glaciers. It is they that created the many finger lakes.
Go to Lakefront Park and gaze to the north. In your mind’s eye fill the valley with ice. The glacier you have formed in your imagination is a long, narrow one. From Cooperstown it stretches off to somewhere beyond the north end of the lake. This glacier, however, only extends from one side of the valley to the other.
Our mind’s eye glacier is moving south. It groans, and snaps as the brittle ice is flexed. It gouges the landscape beneath it, and that erosive process accounts for the great depths of today’s Lake Otsego. But the moving ice also carries with it a lot of coarse sediment. That stuff includes boulders, cobbles, gravel, sand, silt and clay. A lot of that sediment is concentrated at the front of the moving ice.
Our advancing glacier is dependent upon continued cold climate, but climate is fickle; it is always changing. Eventually it will warm, and the ice will begin a long retreat, melting back towards polar latitudes.
But back then the heaps of earth stretched across the entirety of the valley and served to fashion the dam we spoke of. The melting and retreating glacier produced a lot of water and most of it ended up impounded behind that dam. The dam rose to an elevation of about 50 feet above today’s lake level and naturally the lake that resulted was also 50 feet higher.
Once again gaze north from Lakefront Park. Try to judge a line 50 feet above the lake and that line will be the old shoreline. The “fossil” lake has a name; geologists called it Glacial lake Cooperstown. It was big but it wouldn’t last for long.
Nature, it seems, does not like lakes, especially big ones. The earthen dam would not last. Soon, rising lake waters would have overtopped it and begun cutting a channel. Today such a dam would last only months at most. A channel would be quickly cut, and the water would pour through it. But back then it was different. Much or most of the dam would have been frozen solid. Erosion was a very difficult and slow task. Nevertheless, over time, water pouring across the dam would eventually carve a channel and those top 50 feet of the lake would have emptied. Lake Cooperstown became Lake Otsego.
So now, you can pause on the Main Street Bridge and look south at the canyon with a real understanding of it. Once again, use your mind’s eye and fill that canyon with a powerful rush of foaming, white ice water. Turn around and look north; place a melting glacier at the north end of Lake Otsego. Now you have completed a wonderful image of Ice Age Cooperstown.
Contact the authors at randjtitus@prodigy.net. Join their facebook page “The Catskill Geologist .”