We have made a long journey through time. Last summer [2005] we started out along the highway in Leeds and visited the Helderberg Limestone there. Through 13 chapters we have traveled through a thick sequence of thousands of feet of Devonian age strata. Most of those are exposed along Rte. 23 and most of those are sandstones. All of these rocks were once sediments, mixtures of sand, silt and clay. Geologists have long recognized that thick sequences of sediment must have taken very long periods of time to accumulate. Our sedimentary sequence is estimated to have needed 50 million years or so to form.
But there is a second question. Where did all that sediment come from? Thousands of feet of sand a mud must have come from somewhere and it must have been somewhere very big, but where? The answer to that question takes us across the Hudson River and into the Berkshires. If you make this trip you will soon find very different sorts of rocks there. Visit Bash Bish Falls, in Columbia County, sometime and you will see rocks that are not sedimentary. Instead of being composed of sedimentary material, the rocks there are crystalline. We call this stuff gneiss and it formed deep within the crust of the Earth. There enormous temperatures and pressures “cooked” the rock and in that setting all the crystals were able to form. The marvelous thing about the Bash Bish Falls rocks are that they take us not only far back into time but also into the deep depths of the Earth’s crust. We are looking at rocks that formed many thousands, even tens of thousands of feet down.

We are looking at the bowels of an ancient mountain range. We have mentioned those mountains a number of times in past columns; they were the Acadian Mountains. The Acadians were an early version of the Appalachians. They began to form nearly 400 million years ago when a continent we would call Europe today drifted westward and began to collide with North America. The collision is duplicated today in Asia where India is Colliding with Tibet. The result is the great Himalayan Mountain chain. These are the highest mountains on Earth. The Acadians were very possibly just as tall.
Gaze eastward on the horizon and, in your mind’s eye, see the mountains that once were there. Their snow packed peaks are thought to have reached elevations of about 30 thousand feet. That means Bash Bish Falls and its rocks were once about five miles beneath the tops of those peaks. Climb to the top of Mt. Everest someday and then look down five miles into the earth and, presto, you understand Bash Bish Falls a lot better.
Here in Greene County we can’t see any crystalline rocks, but we can look into the depths of the Acadians. A record of those mountains is found along many of our area’s roadside outcroppings. Take a ride east on Rte. 23 to the famed outcrop on the off ramp that leads to Leeds. The rocks here display the deformations that come with two periods of mountain building. The strata stretching off to the left are Devonian in age. They dip steeply to the left. These strata were deposited as flat sheets on the bottom of the ancient sea floor. But now they are nearly vertical. What happened? They were affected by the deformation of the Acadian Mountain building event. As Europe collided with North America the crust here was lifted and crumpled. The strata were tilted steeply their original horizontality. 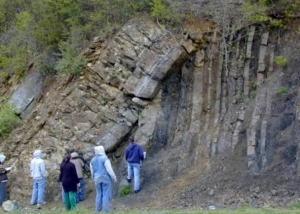 On the right side of the outcrop are even older rocks, dating back to the Ordovician Period, about 450 million years ago. These rocks were tilted twice. First, they were involved in a mountain building event called the Taconic Orogeny. Later they came to be tilted by the Acadian Orogeny. If you are an old sequence of strata then, eventually, you will become involved in multiple mountain building events. That’s why the angles of dip for the older and younger rocks are different. Two angles of dip – two mountain building events; it’s as simple as that.
If you continue down the off ramp and turn right, you will see a long low cliff across the road. There’s more mountain building to see there. The rocks of that cliff have been fractured. The fractures are nearly vertical and there are a lot of them. There has been some movement of the rocks along those fractures and so, technically, they are geological faults. You won’t confuse these with the San Andreas Fault; these never caused too much commotion. But you can see evidence of the motions. Some of the vertical fractures have coatings of the white mineral calcite on them. If you look very carefully you will see that the calcite has been striated. Striations are delicate scratches etched into the minerals during the motion. The blocks on each side of the fracture moved past each other and that caused the scratching. Once you have developed an eye for this you will find a lot of striations. Geologists call these slickensides. 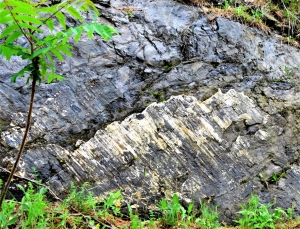 If you return to Rte. 23 and head west, you will find more excellent cliffs of limestone. Stop from time to time along the fine cliffs here, you will soon see more evidence of mountain building deformation. A short distance down the road the strata are not only tilted, but they are folded as well. Watch the rocks carefully and you will large sweeping folds in some locations and tight complex folding elsewhere. It is a most remarkable thing to first observe folded rocks. After all, rock is pretty brittle stuff. Have you ever even thought of bending a rock?
The folds we see here are a testament to the enormous powers that are generated deep with the crust of the earth. Down there, the rocks have been heated to extraordinary temperatures and their deep burial has subjected the rocks to enormous pressures. Under these two circumstances, folding becomes a very plausible, indeed mandatory phenomenon.
But these rocks are not deeply buried within the earth’s crust; they are right at the surface. And that is the whole point. We are privileged to be looking deep into the earth’s crust while standing on its surface. How can that be? The answer is simple: the rocks that we see in Leeds were once buried under thousands of feet of other thick strata. That was hundreds of millions of years ago. And since that time weathering and erosion have been destroying the overlying rocks, the “overburden,” until nowadays what was once buried is now exposed. It is a remarkable thing but at Leeds we are indeed peering into the bowels of the Earth.