The Devonian of Greene County, Part Eight
Rising out of the Sea
Updated by Robert and Johanna Titus

On our journeys back to the Devonian time period we have been visiting a very different Greene County. It was, back then, a tropical land; surprisingly our landscape lay about 20 degrees latitude south of the Equator. That’s about as far from the equator as Cuba is, and it’s quite warm at such latitudes. We have seen the evidence for the tropical climate – right here! Our county has a great amount of limestone that dates back to the Devonian and limestone is the product of shallow tropical seas (it’s what the Bahamas are made out of). But we also see evidence of times when very deep waters covered Greene County, that evidence was in the black shales that are also common around here. None of this is surprising, it is, of course, a geological history and through long spans of time things gradually change.
Today’s episode takes us into a time of transition, and you can go and see some that change for yourself. What we have not seen much of on our journeys is sandstone. Sandstone is one of the most common rocks that a geologist is likely to encounter, but, around here, very little of it formed during the early stages of the Devonian. That would all change. 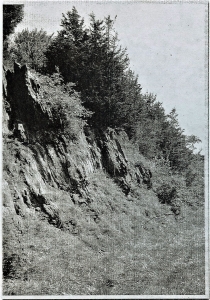