The Abyss of Time
The Devonian of Greene County, Part Seven
The Greenville Press
Updated by Robert and Johanna Titus

Most all of us have seen film of the bottom of the Atlantic in the vicinity of the Titanic. The underwater explorers descend into a vast inky blackness and then, suddenly, their searchlight spots the bottom. They drift slowly across the seafloor and, one after another, artifacts from the shipwreck appear. There is a lot to see, most of it being wreckage from the ship itself. But there is more, you view people’s shoes, their glasses and poignant images such as a child’s porcelain doll face.
We hardly notice the rest, but there it is: in between the artifacts is the mud of the deep Atlantic. Without the artifacts this would be pretty dull stuff. A dark sea bottom of gray mud is all that we would see. A journey to the bottom of a barren abyss is exciting, but only for so long. The view of the seafloor quickly grows monotonous.
We have been visiting the depths of time in our journeys to the Devonian of Greene County. This series of articles has brought us back to many exotic environments of the past, made all the more interesting by the fact that these images tell us of our own familiar landscape as it was in the ancient past. This chapter brings us to that almost awesome seafloor: the abyss. The abyss is a flat ocean bottom of great depth: many thousands of feet. It’s dark down there and cold too. The water pressures are enormous and, all in all, it is an inhospitable place. Even in modern times there is very little life down there; after hundreds of millions of years of evolution only a relatively few animals have come to live in these deeps. Very few of us actually get to go to such a habitat, but most of us get to see film or still pictures of this distant place.
But our accounting of the local geology has brought us to so many such distant ecologies and the abyss is just another one. Drive north from Greenville four corners about six miles. There, just short of the all-terrain vehicle shop, you will see a fine tall outcropping of black shale. Our journey to this abyss has begun. Before you is an outcropping of what’s called the Marcellus Black Shale. This unit of rock is nearly 400 million years old; it was deposited during the Devonian time period. 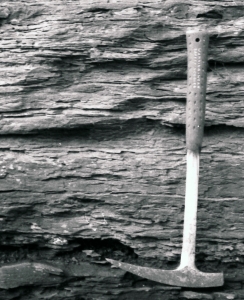 If you take a good look, you will see that these rocks are thinly stratified: they are laminated, and the layering is almost as thin as the pages of a book. In a way these rocks are the pages of a book. Each stratum or horizon of rock records a moment in time. That moment was the brief period when the top of each horizon was the sea’s bottom. If you touch one of these beds you are touching an ancient sea floor, and we mean that quite literally.
You, like all humans, are blessed with a wonderful imagination. You can use it here. Touch a bed and look around you, in your mind’s eye you are at the bottom of the ocean. It is dark and cold, and the pressures are enormous. There are no ship’s artifacts here; there were no ships in the Devonian. Now we are looking “in between the artifacts” and we are seeing nature’s monotonous dark muddy sea floor. It is, indeed, not as exciting as the Titanic, but it isn’t bad. All around us the ocean waters are still, there are few currents at such depths. Also, there are very few living creatures. There are no fish swimming about and not even any shellfish lying on the bottom. This habitat is seemingly lifeless.
But, periodically, there was both activity and life at the bottom of this abyss. If you search the outcrop carefully you will find foot thick layers of light-colored sandstone. These strata stand out among the black shales. They represent real breaks in the monotony. They may well represent submarine avalanches. The slope of this Devonian sea was relatively steep and every so often masses of sand from shallow waters above would come to be dislodged. Great sand masses would then tumble downslope, just as a mass of snow can do on high mountain slopes. Reaching the sea’s flat bottom, the sand would be deposited as a single thick stratum. 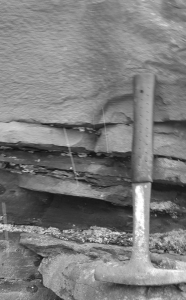 These sands sometimes contain some of the few signs of life that do appear in the Marcellus. If you search these sands, you will sometimes find the fossils of shellfish. We only found one kind. It is something called a brachiopod. Brachiopods, like clams, have two shells but they have a very different anatomy from clams. There are very few brachiopods alive today but there were quite a few of them during the Devonian. This species is called Mucrospirifer. It’s a common Devonian form. It’s only found on the sandstones; we suspect that Mucrospirifer was able to colonize the sand bottom but avoided the dark mud. 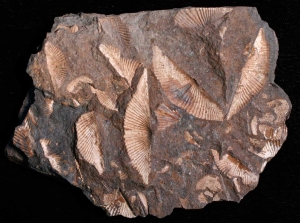 So, there is a lot to see on this stretch of Rte. 32, but what does it all mean? We have now visited some very deep water, and that by itself, is quite something, but is there a broader meaning to all this? There is. In our journeys we have already visited some deep-water black shales, those of the Schoharie Formation back on Rte. 23. In fact, we have found that there has been an alternation of geology. We saw the thick Helderberg and Onondaga Limestones alternating with the Schoharie and now the Marcellus black shales. Greene County itself alternated in its Devonian ecology. Sometimes there were shallow tropical limestone seas. Other times there were deep black mud seas. Why was this happening?
Limestones, and limestone seas, form during times when there was no mountain building going on. Today, modern limestones are only found far from any rising mountains. There are no limestones on the American west coast, but there are plenty of limestones in Florida. The west has mountains and they are rising, Florida does not.
Black shales represent the dark muds that washed off of distantly rising mountain ranges. There are, for example, plenty of dark muds in the Bay of Bengal, south of the Himalayas. So, mud means mountains: this is where, to a geologist, it starts getting exciting. Our Greene County Devonian history is speaking to us of cycles of distant crustal uplift, at the onset of a great mountain building event. Those mountains are called the Acadians and by the end of the Devonian Period, they towered over western New England. They would rise to very great elevations, high enough to actually rival the Himalayas of today.
But, in this episode, our Acadian Mountains have just begun their uplift, they are not yet very tall. As soon as a mountain range begins its uplift it also begins the long processes that will, in the end, destroy it. Those processes are 1) weathering of the rock, breaking down into sediment and soil, and 2) erosion of those materials. These twin processes always triumph in the end; they destroy the mightiest of mountain.
In these early stages of mountain building, weathering and erosion mostly produce mud and river and ocean currents carry that mud away from the mountains. The grains of mud are mostly clay and clay can travel very great distances. That’s why mountain building in New England can form black shale in eastern New York, especially including Greene County.
As we said, to a geologist all this is exciting. We look at black shales along Rte. 32, then turn around, look east and see great mountains rising on the distant horizon.
Our story of the Devonian in Greene County has begun to find its main theme. So far, all of our first six chapters have only been the preliminaries. But, from now on, we will be looking at the evidence of the truly great events of the Devonian. The word a geologist uses for a mountain building event is orogeny (literally the genesis of mountains). This one is called the Acadian Orogeny. It’s important around here, the Acadian Orogeny shaped Greene County more than any other event in history.