Taconic Park is one of the leading scenic areas of Columbia County and Bash Bish Falls is the centerpiece of the park. It’s certainly a fine place just to go and enjoy the outdoors, but of course, people like us can’t just enjoy themselves like that. We are compelled to look at the rocks and there is much to see at this location.
When we visited the falls, we went up to the parking lot at the top of the road and descended the stairs down towards the falls. It didn’t take long to start seeing rocks and to start seeing a geological past. We have talked about mountain building events that affected our area hundreds of millions of years ago. These rocks seem to have gone through two episodes of uplift and they wear the scars of those events. The rocks here are called metamorphic rocks. They once lay many thousands of feet (perhaps miles) beneath the surface of the rising mountain range. It’s very hot that deep into the crust and, not surprisingly, these rocks came to be baked. They were subject to very high pressures as well; imagine just how hot it is and how high the pressure is that far down within the earth’s crust. 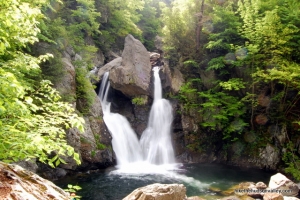 That’s why these rocks are metamorphosed. The term means, literally, to alter the rock from its original state. You can see what happened. These rocks are layered; we geologist prefer to say that they are foliated. If you look at them, you can see the layering. If you had a high-powered magnifying glass, you could see that the metamorphism had resulted and large numbers of crystals growing into this layered fabric. The rock is called a schist and within it are many crystals of a pale mica called muscovite. These give the rock its layering. You may know muscovite as the “glass” of old pot belied stove windows. The morphology of the rock reflects its metamorphic history. This sort of thing doesn’t just happen, there had to be a lot of heat and pressure back then. And “back then” was probably in the Devonian Time Period, almost 400 million years ago
Back then a land mass, that today we would probably call Europe, was colliding with New England. This is going on today where India has been colliding with Asia. Today, the result is the Himalaya Range, back then it was the Acadian Mountains of New England. You can imagine the pressures on our rocks at this time. But you don’t have to imagine them at all. Take another look at the rocks. Many of them are intensely folded. We hadn’t gone much farther than the bottom of the first staircase before we saw very intensely folded schists in a knob of rock just left of the stairs.
There was more, we saw folded, (contorted is actually a better word for it) horizons of white quartz. These seem to have formed when fractures opened up within the schist. As the fractures widened, the quartz crystals formed and filled up the space. This is simply another testimony to how dynamic rocks can become when they are buried that deeply within the earth.
We kept going down the staircase and we noticed that there was something else in the silvery schists. We saw speckles of a Coca Cola colored mineral which we recognized as garnet. Garnet is a gemstone, but these were too small to be of any value. They did indicate to us that this had been a relatively low grade of metamorphism. Our Bash Bish Falls rocks had not been all that deeply buried, and the amount of metamorphism could have been a lot worse.
The staircase and trail continued downward and twisted back and forth until, at last, we arrived at the base of Bash Bish Falls itself. This had been our goal, so we were happy to be there. The falls tumble over a massive outcrop of schist, https://www.facebook.com/?ref=logobut they spoke of a different moment in geological time. We suspect that Bash Bish Falls formed as a glacial spillway. Most falls in our area have an ice age origin and we bet these falls do as well. We gazed at the thunderous flow and imagined a time, about 14,000 years ago when even more water rushed out of the mountains above. This was when the ice age glaciers had only partly melted. Up in the hills above there would still have been a lot of ice and it was melting quickly. Most of the valley in front of the falls was still filled with ice. The flow of meltwater quite likely dwarfed today’s Bash Bish Falls. This must have been a glorious sight in its time.
Contact the authors at randjtitus@prodigy.net. Join their facebook page “The Catskill Geologist.”