The Fall of the House of Vanderbilt
Stories in Stone
Oct. 29, 2004
Robert and Johanna Titus

Do you remember the story of that neighborhood in Schenectady that suffered the slump late last winter (2018)? Two houses and the earth beneath them suddenly began a slow collapse. A dozen or so people had to be evacuated. It made quite the splash in local news, for a while, and then faded from our regional consciousness. Well, we have followed the story and the end was sad, but predictable. It was ordered that both houses be razed. The danger was deemed too great to allow people to return to their homes.
We wrote about this back then and warned that this was no isolated event. Slides of this sort are common where there is uniformly fine-grained sediment, and that is throughout much of the Hudson Valley, including many areas in Columbia County. Our valley once lay beneath the waters of Glacial Lake Albany. Thick sequences of soft clayey sediment accumulated and, periodically, masses of this stuff slide downhill. The formal term is earth flow. It has happened in a lot of places. It will happen again.
You can go and see for yourself one other place where this has been going on and get a good look at how it affects the landscape. At the same time, you can see how a fine piece of architecture is threatened by a future earth flow. Head south down Rte. 9 to Hyde Park and visit the grounds of the Vanderbilt mansion there. The place belongs in Newport, Rhode Island, a great edifice of Indiana limestone. Around it, and to the north and south, is a sprawling estate that lies on a great bluff towering above the Hudson River. The Vanderbilts had a fine view of the Hudson and that must be why they chose this location. In the long term it may have been a fatal choice.
If you look around the mansion you will quickly notice that the grounds are smooth and flat. It might seem unnatural and you might suspect that the landscape was bulldozed, but Nature did this herself. There is an ice age heritage here. About 14,000 years ago this was Glacial Lake Albany. And back then the local stream, “Crum Elbow Creek,” flowed into the lake. This little stream carried a lot of sediment and deposited it in the form of a large delta that expanded out into the lake. It is the nature of deltas to have flat tops and very steep fronts. That accounts for the flat landscape here and also the steep slopes that face the Hudson Valley. The Vanderbilt mansion was built on the edge of the ice age delta. While you are walking the grounds, imagine yourself in chest deep icy lake waters. 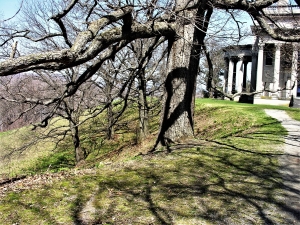 Walk south from the mansion, towards the formal garden, and notice that the forested slope has a scalloped appearance; it looks as if a large ice cream scoop took out masses of earth. This is typical earth flow landscape. Each “scoop” represents an old slide. These have had the time to “heal” with the return of the forest. 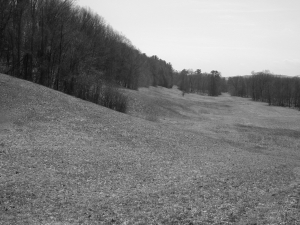 Return to the south end of the mansion and take the dirt path downhill. Beyond is a long grassy meadow. If you look along the edge of this meadow you will, once again, see that scalloped appearance.
Now head north from the visitor’s center on the estate driveway. Soon you will find a very nice vista of the Hudson Valley. It’s worth the trip by itself. But, once again, look over the edge of the steep slope here and see the scalloped appearance. Over the eons many earth flows have occurred all along the edge of the old Crum Elbow Delta.
There is no reason to think that any of this has stopped. We would expect that every century or so, more of these events will occur. Now look and see how close to the edge of the delta the great mansion is. We are predicting that someday, much as was the case in Schenectady, a sizable portion of the Vanderbilt mansion will begin a downhill slide. Earth movements are very egalitarian; they affect the rich as well as the poor.
————————————————————————————————————
Contact the authors at randjtitus@prodigy.net. Join their facebook page “The Catskill Geologist.”