Can you fold a rock?
Windows Through Time
Updated by Robert and Johanna Titus
Register Star papers
March 22, 2012

Sometimes we geologists are just as dangerous as bird watchers. Bird watchers are notoriously bad drivers. They will be sailing down the highway when, all of a sudden, some marvelous bird goes flying by. Cross your fingers if you happen to be driving nearby. And, if you are a birder, don’t write us to deny it; we know better!
Well, as we said, we geologists can be just as bad. We too, can be sailing down the highway when, all of a sudden, there is some marvelous outcropping of rock: something we never expected to see. Watch out, we are liable to hit the brakes and come to a screeching halt, with you screeching too.
Well, you can probably see where we are going on this. Recently, we were on driving on Tarrytown Road, off Rt. 32, on our way to a lecture up at the Thacher Nature Center. Just after the road makes a sharp right turn, there was an absolutely beautiful folded mass of rock. This was stratified rock and, specifically, limestone.
Did we say “folded rocks?” We think we did. If you are not a practicing geologist, that may seem like an unlikely notion. How on earth do you fold rocks? Take a look at our photo and see for yourself. It shows the outcropping that we saw. The strata are from the Helderberg Limestone and there they are, folded into a broad curve, an upside down U. Geologists see such folds a lot; we call them “anticlines.” 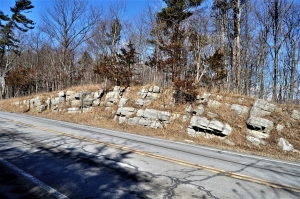 It must stretch a good 50 feet from end to end. And it must rise up ten feet or so. But how can such a thing happen? Go find the strongest man you know and give him a rock and ask him to fold it. There is not a chance that he can do that, not even with a small thin rock. But there it is, a great mass of folded stratified rock.
We wonder what professional geologists thought of all this, centuries ago when the science was young. They could not have had any ideas, none at all. It must have been such a mystery. That happens a lot in science, right up to this day. We see a phenomenon and we just can’t explain it.
But geology is not a young science; it is a venerable old one. We have been solving our problems for a very long time now and we can explain a lot of them. So, how did these folds occur? The best answer involves the science of plate tectonics. That was the great revolution in geological thought that occurred in the middle 20th Century. We now know that continents and subcontinents can move across the surface of the Earth. North America is sliding west, right now and beneath your feet. It’s very slow so you can never feel the motion, but it is happening.
Starting during the Devonian time period, about 400 million years ago, a landmass named Avalonia was moving westward across an early version of the Atlantic Ocean, sometimes called the Proto-Atlantic. Avalonia eventually collided with North America and that generated a lot of pressure. The stratified rocks of North America came to be squeezed. You can simulate this with a large paperback book. Hold it in your two hands and press. The book will fold, quite likely into an anticline. One hand is North America while the other is Avalonia. It’s a nice easy lab experiment; you are doing science. Well, that is was happened to the strata along the highway.
But our problems are not all solved. We didn’t hit the brakes because we had seen a fold. We hit the brakes because of which rocks were folded. You see, the problem is that there are no other folded rocks in this vicinity. There are lots of outcrops of the Helderberg Limestone all around, but none of them are folded. These strata lie just a little too far to the west to have been folded by the effects of a colliding Avalonia. You can go see this for yourself. Just wander the highways around there and see what you can find. The answer is nothing but flat lying rocks.
We must say that we are flummoxed by all this. How could it be? A lovely anticlinal fold just seems to rise up out of the ground without a proper explanation. We may be flummoxed, but not bothered all that much. In truth, it is nice to still have mysteries. We don’t envy geologists or other scientists of the future. They will have so many fewer problems and mysteries to go out and solve. Or will they? That’s debatable. But we do have problems. We are blessed with lots of them.