On The Rocks
Dec. 6, 2007
Updated by Robert and Johanna Titus

Geologists are generally very good at spatial relations. There must be some lobe in the brain that functions to give us a special edge in that facility. We need it; we are always envisioning the many complex geological structures that we come across. But there is more; there is, after all, a fourth dimension and that’s where geologists are very, very good. Come along and see.
Let’s take Rt. 9W down to the malls, just north of Kingston. You might not think this would be an attractive field trip site for a geologist, but you just might be wrong. At the south end of the malls, just across from the Red Lobster, the road forks. We were down there on Black Friday and soon we found ourselves, armed with a camera, risking our lives for you the readers of the Woodstock Times.
Black Friday is certainly quite a moment in time. Hoards of avaricious shoppers descend upon all those retail outlets, determined to begin their annual rites of Christmas shopping. The highways are crammed with traffic and that is where we found ourselves. We stood, precariously perched on a supposedly safe set of double orange lines, with traffic streaming by on both sides. Oblivious to our near certain doom we looked south: and into the deep geological past.
Just where the highway forks, between the two lanes, is a very fine outcropping. Beyond, and off to the left, was another equally impressive ledge of rock. These were exposures of the Helderberg Limestone, one of the most important units of rock in the area. We said we were looking into the past, and what we saw there was the Helderberg Sea. 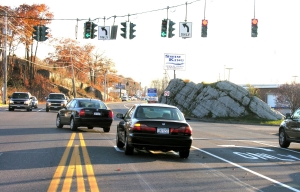 Back, just a little more than 400 million years ago, during the Devonian time period, this was a very different place. There were no malls and no highways back then. What there was here was ocean. This Helderberg Sea was a very shallow, very tropical sea. Today you would have to visit the Bahamas or west Florida to find something akin to this.
But we were not in the Bahamas and we were not even of this time. For us, it was the Devonian and we were gazing across the shining, aqua-colored waters of the Helderberg Sea. Its shallow seafloor was visible from above. We looked down and saw just a few strange shellfish and fronds of algae waving in the active marine currents. The sediment was composed of calcium carbonate, a mineral those plants and animals secreted.
That sediment long ago hardened into limestone and that is the rock exposed across from today’s Red Lobster. We were back in the present, and noisy Black Friday traffic streamed by us. We had the presence of mind to shoot a couple of photos. Then we noticed something about the stratification; it was tilted, with the beds of rock inclined to our right. The same was the case with that second outcrop, just a little farther down the road. Then we were swallowed up into the past once again, this time it was to a different past.
All around us was total darkness, but we could see, we just don’t know how. We were still in exactly the same place where we started our journey, but there was no highway and, of course, no orange stripes. In the spooky darkness before us we could make out the very same inclined bedding we had just been looking at. But now, each of those strata continued upwards, rising far above us. We had traveled forward through time about a hundred million years. The Helderberg Sea was long gone. It had been buried in a mile-thick accumulation of sediment, mostly sand. Then all those sediments had hardened into rock and the whole sequence had been uplifted and tilted.
Above us, for a mile or so, was the bedrock mass of a great mountain range, called the Acadian Mountains. Most of its highest peaks were off to the east in what is now New England. That’s where most of the uplift and folding had occurred, but the deformation in front of us was nothing to sneer at. We were now deep inside a still rising mountain range. It was very much as if we were a mile beneath the surface of today’s Nepal with the high peaks of the Himalayas nearby.
Now we noticed the heat and the intense pressure that comes with burial at such depths. There were some occasional groaning sounds; deformation of the rocks was ongoing. All this could do us no harm for, on this journey, we were the mind’s eyes, and little harm can befall the human imagination.
But living bodies can be run over by cars. We found ourselves back on the orange stripes of Rt. 9W on that busy Black Friday. We took one more photo and scrambled off the highway, still in one piece. Our journey was a fine exercise in spatial and temporal relations; we had seen the Kingston malls of today and we visited the same sites in moments of their distant past. It’s all the same, kind of. We geologists are good at this sort of thing.
****************************************************************************************************
Contact the authors at randjtitus@prodigy.net. Join their facebook page “The Catskill Geologist.com.