Rockcraft 101 – the Shaved Rock – We occasionally write about a mythical field we call “rockcraft.” There’s really no such thing or the Boy Scouts would have a merit badge and a handbook about it. But if there were a field of rockcraft it could keep an outdoorsman quite busy. Rockcraft would be the use of signs found in rocks to guide you in the woods. Believe us, glaciers would be responsible for a great deal of rockcraft.
Think about what a major glaciation amounts to. In this vicinity, for example, at about 20,000 years ago, there was a sheet of ice about a half mile thick. Imagine the weight of all the ice. Not only is the pressure of that weight bearing down upon the underlying countryside, but there is the frictional drag which comes with the southward movement of the ice sheet. That’s a lot of stress.
It gets worse. The bottom of a glacier is, to say the least, dirty. There is a great deal of silt and sand down there. Also, there are likely to be many cobbles and boulders being dragged along. And all of this material is pressed onto the underlying countryside. It’s no surprise to find out that a passing glacier leaves a lot of evidence behind. 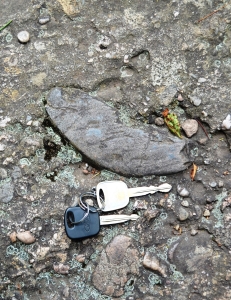 There are a lot of glacial phenomena that we like to watch for. One of them doesn’t even have an official scientific name that we have even seen. So, we just call it “shaved off rocks.” This is what happened. Here in the Catskills there are a large number of sedimentary rocks that are rich in small and large cobbles. The rest of the rock is usually a sandstone, so imagine cobbles floating in a matrix of sandstone. When a glaciation occurs, it is normal for a bedrock to become ground down by the sand and silt in the passing ice. The behavior is exactly like what you get with sandpaper, only this process is much more effective; it can grind away inches of solid rock.
When a glacier is grinding away at a sandstone it is eventually liable to encounter some of those cobbles we mentioned. These may become popped out by the moving ice, but they are more likely to be held in place as they are well cemented into the rock. That means that the grinding process will begin to bevel right through the cobbles and shave off their tops. What’s left behind is half a cobble with the top planed off to a flat surface.
That leaves a very distinctive rock outcropping, a sandstone surface with the beveled off cross sections of cobbles upon it. A good place to go and look at such rocks is along the escarpment trail, right at the edge of the Catskill Front. Your best chances of seeing these are at North Lake State Park, just north and south of the lake itself. We have seen some very nice beveled off rocks immediately south of Boulder Rock and also up on Newman’s Ledge (Park maps will guide you to these sites). If you find either of these locations try to imagine the thick sheet of ice that was once here. Then remember that the ice filled up the entire Hudson Valley below.
If there is anything bad about these shaved rocks, it’s that usually you cannot tell which way the ice was moving. That’s not always the case. When the ice was relatively thin, it did not press down as much. Under those circumstances a solid quartz cobble might put up enough fight to resist the beveling at least to a certain extend. That’s when you get something called a “rat’s tail.” A vee-shaped cone of sandstone lays on the protected downstream side behind the cobble and is sculpted by the passing ice. The protected cone points in the direction of flow. We found one of those on the point of rock between North and South Lakes.
Our field of rockcraft is rarely about very important phenomena. It’s, instead, a field devoted to recognizing interesting things in the rocks. Shaved rocks are not terrible important, except as testimonies to the erosive power of a glacier. That’s good enough.
===================================================================
Contact the authors at randjtitus@prodigy.net. Join their facebook page at “The Catskill Geologist.” Read their blogs at “thecatskillgeologist.”