Depths of Depression
On the Rocks
The Woodstock Times
Updated by Robert and Johanna Titus
Mar. 5, 1998

The sinking of the Titanic is one of the great stories of history. It’s complete with drama, heroism, and even suspense, despite the inevitable ending. Throw in a little romance and no wonder that the current movie has been such a hit. Part of the movie’s success is the allure of the deep. The ocean’s great mysterious abyssal plain retains, even today, a compelling fascination. To scientists, however, equally gripping was the story of the discovery of the sunken liner. You remember it. Intrepid oceanographers, from Woods Hole, Massachusetts, descended to the depths of the ocean’s great abyss in tiny submarines. Powerful headlights shined upon the long unseen sea floor and then upon the wreckage itself. What an incredible moment! The substance of fiction became history.
The depths of the seas had long been shrouded in mystery, and to see actual film from the deep is one of the great achievements of our century, certainly ranking with anything that our space programs have achieved. Much of the abyss is monotonous mud, but there are those many shipwrecks, and a whole exotic ecology of truly wondrous and intriguing animals.
All of this imagery is made even more appealing by the seeming impossibility of traveling to the bottom of the deep sea. Few of us, after all, get invitations from Woods Hole. If you could visit the great abyss, would you leap at the chance, or would you shrink from the real danger of the journey? Would a good movie be enough, or would you have the adventurous streak needed for that perilous trek to the very bottom of the sea? It is dangerous; people have died down there.
Let’s make it easy. We can have you onto the abyss in about half an hour and it will be no more dangerous than a short car ride. Take the Glasco Turnpike east from Woodstock until you approach Mt. Marion. Look for John Carle Road and turn right and head south along it. The path of the road is like that of a sinking ocean liner. First it strays only just a little from its straight path. Then, as if filling up with water, it veers sharply to the left and rapidly descends a steep slope. Near the bottom it lurches sharply to the right and settles, once more, onto a flat floor. And indeed, like a sinking ship, the road has arrived at the bottom of a sea.
There is nothing figurative in our remarkable claim; this is really the bottom of a sea. Or it was. Rising to the right of the road is a cliff of dark black sandstones and shales. These accumulated at the bottom of a deep sea, one that was here nearly 400 million years ago. It can be called the Catskill Sea and the layers of rock you see here were once the muds that made up its bottom. 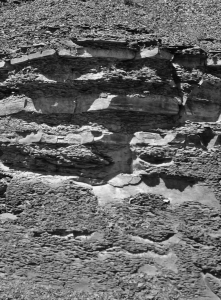 Mix of black shales and sandstones

It’s a curious thing, but way back then, the Devonian time period, most of New England was rising into a substantial mountain range. These, the Acadian Mountains, would reach heights of maybe 15,000 feet – perhaps even more! As they were rising, however, the crust of the adjacent vicinities, including today’s Hudson Valley, became depressed. Given time, a fairly substantial deep sea was produced. How deep? we don’t know, but it would have reminded you of the depths of the North Atlantic, a still, mud-bottomed, dark and very silent sea floor.
Much of the roadside exposure is thinly bedded, black shale. That was the mud. Those layers piled up slowly over uncounted centuries. Each thin horizon was once the sea floor. With time another and then another thin seam of mud would accumulate. As the weight piled up the mud was squeezed and hardened into shale. The dark sandstones are somewhat different. These were more active influxes of sediment, moments when masses of sand tumbled into the depths. 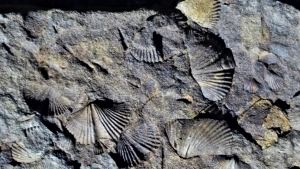 There were living creatures at the bottom of this sea. It only took us a short time to find fossil shellfish here, small animals that spent their whole lives on this quiet sea bottom. No crashing ocean liners interrupted their lives. Scientists did come and visit them, but not until nearly 400 million years after their deaths.