Did you hear the news about the recent landslide on Bridge Street in Greenport at the Young Italian Men and Women’s Club? It’s something that happened once before, right there in 2006. I had suspected that something like this was going to happen when I published the following column six months earlier in the Columbia County Independent. Johanna and I have been following the landslide issue ever since. 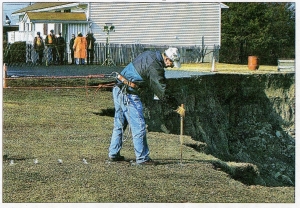 I have, recently, had a growing sense that something has been going on geologically, here in our upper Hudson Valley. I think a pattern has been developing. Scientists notice patterns and we seek to understand them. I had better explain.

I commonly drive past the Gilboa Reservoir. Lately, the water has been pouring over the top of the dam. That’s unusual; most of the time the reservoir is well below the dam’s top, sometimes the reservoir is nearly empty. It’s easy to say that it has just rained a lot recently, but I wonder.

Over the last few years there have been a number of damaging slumps in the upper Hudson Valley. First came the Delmar slump, south of Albany, which put a major road out of commission for quite some time. It had been built on the muddy sediments of an old ice age lake, Glacial Lake Albany. The sediments simply gave way and slid into Normans Kill. Well, these things happen, or so I thought at the time.

Slumps are an ongoing problem in the Hudson Valley and I have written about them before, but there seem to be a lot of them lately. Two weeks ago there was a new slump in Amsterdam. This one also seems to have involved the sediments of another ice age lake delta. That’s alarming; why are these events coming at such a rapid rate?

But then it got even worse. I began receiving E-mails from people in Valatie, complaining about flooding basements. Three houses on New Street have been experiencing serious problems for weeks. Basements flood; that’s their job, but some of these folks claim that they have never seen the likes of this even after decades of residence and they are worried.

All this may just be coincidence and might mean next to nothing. Or, all this may just indicate that we have had a lot of rain lately. That would explain this year’s problems, but it would not tie in the events of recent years.

In the end, it seemed to me that there was enough to warrant a little investigation. It looks to me, on the face of it, that the region’s water tables have been rising and that the recent heavy rains have triggered a series of problems. This trend may be something that has been developing over the last several decades. Can I document this the way a scientist should, and can that lead to an explanation? Well, I can try.

I checked with the National Oceanic and Atmospheric Administration website and found some interesting things. New Yorkers have seen some climate change over the past century. Our average temperature has climbed only about one degree Fahrenheit. More interestingly, however, our rainfall has climbed about six inches, from 36 to 42 inches/year, that’s 16 percent.

If we have seen a lot more rainfall, then it follows that there should be more groundwater and higher water tables. Add a few heavy rains and it seems logical that basements would start to flood and slumps might be triggered. People might well remember that these things didn’t happen in the distant past because they really couldn’t have.

What I am suggesting is that if we have a wet summer or, worse, a snowy winter and rainy spring next year then we may see serious problems. Is all this good science? Certainly not; it is the result of just a little work over a short period of time in response to some rapidly occurring events. It’s not theory, just hypothesis.