The struggles of a Devonian clam

We miss Walter Meade’s articles in Kaatskill Life. Walt was with our magazine from its inception until his death. He enjoyed a lifetime of close observation of Catskills natural history and he shared his experiences with us in his writing. Our favorite article was from the Winter 91‑92 issue. Walter had been walking through a light winter snow when he found fresh turkey tracks. He followed them and found the evidence of the unseen animal’s activities. It fed upon a wild rose bush, it drank water from an old tub and then the hungry bird fed yet again, this time upon some ferns. Walt never did catch up with the turkey but he did find evidence from the tracks that the animal had become aware of its stalker. The wary turkey had watched Walt’s approach and then had taken flight. Wing tip marks in the snow were the last traces that Walt found of that bird.

Though one of us is a biologist and one a paleontologist, most of the time the plants and animals that we study have been dead for about 400 million years. Unlike Walt, we almost always catch up with the creatures we stalk. They are frozen in rock; in the eternal winter of death, they cannot take flight. But, even though we can catch up with them, we are almost always deprived of the pleasures of observing them as they were in life. As we study fossils, we are acutely aware that what we see are just the cold, dead, mineral remains of creatures which were once really alive.

Occasionally, however, the fossil hunter does have the opportunity to make truly vivid observations of moments in the lives of very long ago. Here in the Catskills, you can sometimes come across some of the most remarkable records of ancient life, moments of danger and desperation endured by some of the most humble creatures of the very ancient Catskills, the clams.

These clams are of a species which has no common name. It is described in Latin as Archanodon catskillensis. The species lived in the rivers and lakes of the Devonian age Catskill Delta (Kaatskill Life, Summer 1992). Lardner Vanuxem, a New York State Museum geologist, discovered them during the 1830’s. Figure one shows his illustration of one of them. Figure two shows how we interpret them to have reposed on the stream be3ds during life.  They each had a strong, muscular “foot” to dig a shallow 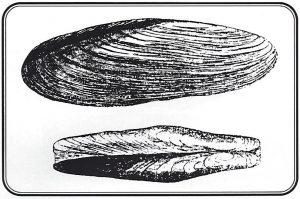 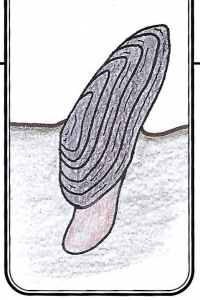 on the stream beds during life. They each had a strong, muscular “foot” to dig a shallow

resting place on the stream bed. Then they laid in the sands with their shells open and inclined toward the currents. Stream flow brought nutrient‑bearing waters to the clam and delicate membranes filtered food from those waters. This species of clam was gregarious and lived in colonies. See figure three which shows a slab covered with the impressions from one of these colonies. Each imprint is the resting mark of an 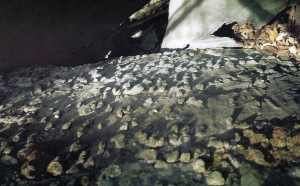 individual clam. The slab is upside down and the marks are of the sediment which filled in the original impressions. Figure four is a close-up of such a burrowed surface. 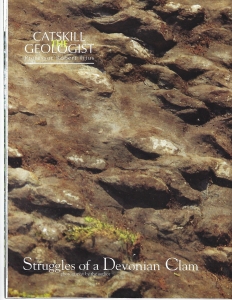 Archanodon must have had a simple and easy life, although not one without its hazards. These dangers of the Catskill Delta were described earlier (Kaatskill Life, Summer 1991). Frequently there were great floods and huge quantities of brown water swelled the streams, overflowing their banks. As a flood swept across the clam colonies, they were generally able to hang on and survive. Soon thereafter the real perils began. The subsiding flood waters deposited large amounts of sediment. In the Catskill Delta it was not unusual for several feet of sediment to be deposited in a few hours by a single flood. If you are a three‑inch clam buried by three feet of mud, you are in trouble. Our clams faced an unenviable moment of terror: they must dig or die . . . they dug.

With its large foot, Archanodon was an active clam and it was able to work its way upward through the sediment and escape its premature grave. Look at figure five. 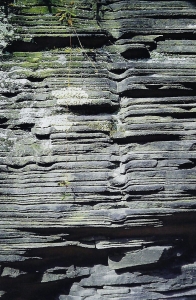 These are the burrows left by the panicky clams. Notice the horizontal structures within the vertical burrows; we call these meniscus structures. Each meniscus records a single

upward motion of the clam as, inch by inch, it worked its way to freedom. Often, in bluestone quarries, we find slabs of sandstone with round traces where the clams burrowed right through the, then still soft, strata (figure six, burrow is above and right of hat). Apparently the clams were 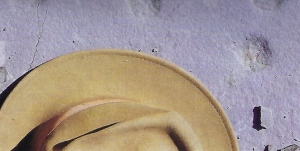 nearly always successful. I have never found a fossil clam only halfway back to the surface nor have I found one still at the bottom. Evidently, whole colonies were able to scramble back to the surface and reestablish themselves, no doubt waiting to face the next flood.

Life is a struggle, today or 400 million years ago, and these fossils demonstrate that so clearly. We paleontologists don’t often get to see history as vividly as do the naturalists of today’s world, but we do have those rare opportunities. The Archanodon burrows are good examples; there are others. These are called trace fossils. They are not traces of the ancient bodies, but traces of life itself. They remind us how brief a single lifetime is in the long history of life itself. These creatures of the distant past were, in their time, just as real and lived just as fully as do the plants and animals of today and those of the distant future. There is philosophy in rocks.