A Night on Overlook Mountain

THE ROAD to Overlook Mountain used to be important. It served two main functions: It brought resort tourists up to the mountain’s hotels. Several were built there in succession; they all burned. Also it brought downhill lumbering wagons loaded with Catskill bluestone from the area quarries. Today the road is no longer important. It can’t even be called a road anymore; it is just a hiking trail. 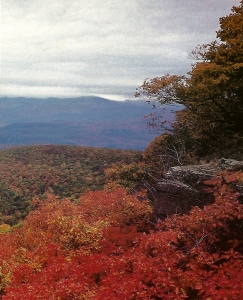 The trip to the top of Overlook is well worth the effort as the peak offers one of the best views in all of the Catskills. To visit this mountain in the early fall, just as the leaves are turning, and to spend the night there under a rising full moon is one of the great experiences of our Catskills. The climb up the path is a bit tedious, however. The trail has none of the interesting steep, rocky stretches that you usually encounter on Catskill trails, just a steady, grinding incline. You know that the long climb is nearly over when you reach the old walls of the last of the Overlook Mountain House hotels. The ruin is a gem. Four stories tall and composed of poured cement, it has the look of something that will be there for an eternity. It won’t. 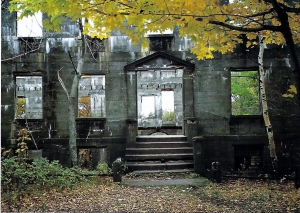 Beyond the hotel is the mountaintop itself and a state fire tower with its panoramic view. The peak is windswept, and large knobs of rock poke through the thin soils. The strata speak to the geologist and tell of the ancient Acadian Mountains which once lay to the east, but are now nearly entirely eroded away. The rocks we see here were once coarse sands, sediment which accumulated on the slopes of those long ago mountains. These are not sediments anymore; time has hardened them into rock.

Sunset is subtle: The afternoon light dims imperceptibly and then the sky darkens rapidly. This location has been here for four and one half billion years and the site has witnessed all of the sunsets that such a length of time brings. To the east, exactly as the sun descends, a full moon rises; it is the fabled, harvest moon. The first lights to join the moon are the brightest stars; they are soon joined by the lesser lights of the full moon’s sky.

I will have no fire at this night’s camp. I would enjoy the heat, as it is no longer warm out. I wish instead to be alone in time here and I do not want any bright lights to distract me from participating in this particular cycle of time.

Off to the east are the Berkshire Mountains. These beautiful and serene hills are the remnants of the much older Acadian Mountains which once towered over this horizon. It grows fully dark now and the Berkshire landscapes stand in sharp contrast under the rising moonlight. As the moon continues its ascent, it draws away from the mountains and they fade into the darkness. With an evening mist, the lights of civilization in the valley below also disappear.

The Berkshires were not always here, but it has now been four hundred million years that the moon has been rising above their silhouettes. Before then the view was not that of New England but of an ancient ocean, the Iapetus Sea, unblemished by any land masses, let alone mountains. Back then it must have seemed as if that sea’s stretch extended forever into the east. But that was false and there were clues of something going on out there beyond the eastern horizon. From time to time, dark clouds of smoke rose above the horizon. First they were only low, dim and distant, but later they appeared larger and darker than ever before. There had to have been a day, a moment in time, when a single pinnacle of land first emerged upon that horizon. During the lifetime of any Devonian age creature, no change would have been noticed, but as many lifetimes passed, that pinnacle was transformed from an occasional glimpse to a permanent fixture upon the seascape, growing larger and broader. Occasionally great, thunderous roars would emanate from that eastern monolith and sometimes even lightning could be seen within the billowing black masses of soot. It was the nighttime and moonlit eruptions which were the most spectacular. The immense, rising clouds of dense smoke, sharply outlined in moonlight, would have been unforgettable – had anyone been there to remember.

In between these more and more frequent volcanic episodes, the peaks of the now great mountain range became white with snow. Even here in the tropics they had grown tall enough. Beneath the snowy fringe, the mountains were a desolate brown and lifeless gray. But as they loomed taller and closer, a thin low red horizon competed with those elevated but more somber colors. Then finally, joining the red, was a very low wisp of green.

The Overlook Mountain vicinity had once gazed out upon the unbroken blue of the Iapetus Sea, but now it would witness the disappearance of that sea. The red and green horizon grew closer and the image sharpened into that of a low tropical foliage growing upon the brick red soils of a coastal delta. These were the world’s most primitive forests, dominated by twins of the great tree ferns. Crawling the soils were the first land animals, primitive insects, millipedes and spiders. These were the pioneers of forest ecology, and forest ecology is the chief claim to fame of the great Catskill Delta.

The delta advanced slowly, but it could not be stopped; time cannot be stopped. The waters went from salt to fresh; they suddenly grew murky and brown, and the Overlook vicinity was buried. The shrouds of burial were the sediments of the rivers, lakes and swamps of the great delta. These soft, warm sediments encased and preserved much of the delta forests.

Millions of years, then tens of millions of years of blackness followed. The pressure of the thickening sediment intensified. The great delta became a petrifaction, its soft warm sediments hardened into cold stone sculptures of rivers, lakes, marshes and forests. After about one hundred and fifty million years of increasing pressure, the weight of the overburden stopped growing. And, after a long pause, the pressure, ever so slowly, began to lessen.

If it was possible for light to penetrate rock, even a little, then, over the next 200 million years the Overlook vicinity would have become dimly and then brightly illuminated. But this does not happen; light does not pass through rock and Overlook lay, for all of this time, in complete blackness.

The sleep of Overlook was dreamless and darker than anything humans can know. It was deepest and coldest just before the dawn. Above there were thick and heavy glaciers grinding their way southward. The full moon, now low in the western sky, brightly illuminated a plain of arctic desolation, extending in all directions as far as could be seen. Only in the west were there peaks that rose above this crystalline sea. These appeared as silhouettes of black against the radiant moonlit horizon.

The processes of weathering and erosion do their work slowly but they never quit. Glaciers do speed up the process and the inevitable results are sudden: the breakthrough occurred and sunlight, for the first time in 400 million years, warmed the strata of Overlook.

Just exactly as the harvest moon sinks beneath the horizon, the new day’s sun breaks above the cloud banks of the Hudson below. This view, a Frederic Church masterpiece, has returned once again as it has for millions of years, and as it will for millions more.

I sleepily watch the sunrise above the low fogs of the Hudson Valley. Beyond there is neither an Iapetus Sea nor an Acadian Mountain Range to be seen, only the low blue hills of the Taconics. I am stiff and cold and in need of coffee. That can be found in the lowlands below, where I will soon return.

Time, the English geologist James Hutton observed, gives us no vestige of a beginning, no prospect of an end.