You have probably seen the news of a woman who was struck by a falling rock at John Boyd Thacher Park. I hope she has a speedy recovery. But, what drew her to the trail where this accident occurred?

John Boyd Thacher Park is one of our region’s scenic gems. It occupies a position high up at the top of the Helderberg Mountains. The whole park is one great overlook. The view is a sweeping panorama of a broad rural landscape. There are apple orchards down there and all sorts of beautiful countryside. Fifteen miles, or so, off to the northeast lies Albany, the nearest urban area. You can see it quite well, without it messing up the scenic nature of what is close by. 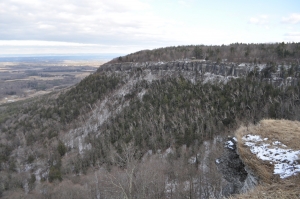 The park has been there for very nearly a century. It was the gift of Mrs. Emma Thacher, wife of an Albany mayor. It, of course, is named for her husband. It has always been a state park and a popular one. The view is its leading draw. You can see much of the Hudson Valley from up there, as well as parts of the Mohawk Valley. There have been a number of facilities, including a swimming pool, play areas, picnic and barbeque facilities. These are joined by 25 miles of trails, the best known one is the Indian Ladder Trail which drops down off the escarpment and follows a tall cliff off to the west. The trail passes waterfalls and the openings of caves. It’s not a hard hike, having well laid out staircases and footings. The park is well suited for nearly everybody in the family.

The Helderberg Mountains form what is called an escarpment.  That is a great ledge of rock facing a broad open landscape.  You are aware of this wherever you are in the park. All the roads and sidewalks follow the edge of the escarpment and all of them offer views.

What, exactly, is an escarpment? It’s not just a ledge of rock; it is a ledge of very hard rock. Something about it makes it far more resistant than horizons of strata above and below. In this case, those strata belong to the Helderberg Limestone. You will see the Helderberg as soon as you arrive. The rocks have a dull gray color to them. I hate to admit it, but these are really boring looking rocks. In this column, we have visited the Helderberg a number of times. It is one of the most important units of rock in our region. At Thacher we find out how important.

In short, it produces a lot of important landscape. I would like you to keep in mind this concept of an escarpment as you travel to Albany and back. Coming south from Albany on any number of highways you will look ahead and up and see the breath of the Helderberg Escarpment. It spreads across the entire horizon when viewed from most locations. That makes it big and Thacher occupies just a very small part of it.

Some highways, like Rt. 32, will take you right up the steep slope of the escarpment and, after you have crossed the top, you will soon find your way to another escarpment. This one is smaller but it is there. And, after passing that one, soon you will find your way to still another. It doesn’t seem to ever end. With time, you will look ahead and see the northeast Catskills. These mountains make up one more escarpment. And it is for the same reason; the northeastern Catskills are composed of stratified rocks almost as tough and resistant as the Helderberg Limestone.

We are learning something about stratigraphy itself. Our region is composed of layers of rock, strata, which all tilt just a little to the southwest. Some horizons are composed of tough stuff and they have eroded into escarpments. Other horizons are composed of strata that are much softer and they become lowlands or swales, lying between the escarpments. Once we understand this and we travel around and notice it all, then we have a better sense of the lay of the land. We become much more knowledgeable and attuned to the landscape all around us.

Then there is time, the endless amounts of geological time that all this represents. We drive south on Rt. 32, from Albany to the Catskills. We pass one escarpment after another, one horizon of stratified sedimentary rock after another. And it slowly sinks in how much time it must have taken to accumulate all these horizons of rock. It is reckoned by geologists that we are looking at tens of millions of years.

The season is up and running at Thacher. May 1st was the usual opening day for the Indian Ladder Trail. That will give you a chance to go visit this fine escarpment. Contact the author at titusr@hartwick.edu Visit his website “The Catskill Geologist.”