Visions of the past 1, the Porch at Cedar Grove

One of the cultural landmarks of our region is the renowned Hudson Valley School of Art. Its artists explored the Hudson Valley and the eastern Catskills during the middle two quarters of the 19th Century. The canvases they painted captured the region when much of it was still wilderness. The word “sublime” has been used to describe the raw natural scenery that they sought to portray.  We admire the works of these artistic genius’ and we revere the landscapes that, to a great extent, have still not yet lost their wild natural states.

The recently conceived of Hudson Valley Art Trail is at once an honor to this artistic tradition and also an opportunity, even inducement to go out and explore the natural beauty that inspired the art. The two of us have been closely involved with Cedar Grove, the Thomas Cole National Historic Site, pretty much since it was founded, a bit more than ten years ago. It is only natural for us to participate in the art trail, bringing our own visions to it. We pause at the various locations on the trail and gaze at the scenery that was painted at each one.

But we bring very different visions to each site. We are scientists and we see each one for its geological heritage. We look into the past and see a certain sublimity that was denied to most of these artists. We feel privileged to see what they could not, and we have strived to portray what we see in some of the Art Trail literature. We are not artists; we serve as geologists who “paint” with words our visions of the past. We would like to, starting here, bring you back to many of the sites on the Art Trail and transport you visually to our version of these landscapes. 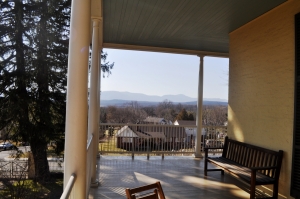 The view from the porch at Cedar Grove. Catskills in distance.

We begin where the Art Trail begins, on the porch of Cedar Grove, Thomas Cole’s home in the village of Catskill. The porch faces west and commands a view of the Hudson Valley and the distant east-facing slopes of the Catskill Mountains. Today’s view is noisy with highway sounds, and urban in its modern setting, but it is still a very fine experience. Thomas Cole enjoyed a far more rural version; he would likely have been appalled by what is here today.

But we can do Thomas Cole one better. He was last here in 1848; we can travel back to 15,848 BP and enjoy the very same view at a very different time. Back then the Cole porch site did exist; one could have found it using GPS devices. We don’t need that technology; we have the benefits of something far better – the mind’s eye.  We travel back to an August 9th of that year and stand exactly where the Cole porch is and gaze west.

What happens immediately is that all the traffic noises go silent. It is a quiet day, with no wind. There are a few late summer insects but no birds. All around us is a thin foliage of young pine and spruce. None rise high enough to block our view to the west. Out there, across the valley, lie the Catskill Mountains. We see shapes that are familiar. We spy Windham High Peak and Cairo Round Top. To the south lie Stoppel Point, then North and South Mountains. We strain to see High Point and Round Top and the distant Overlook Mountain. All these form a familiar skyline, but still – something is wrong with our view.

Below these peaks there is no greenery. The slopes of our Catskills lack trees. This landscape is just starting to recover from the Ice Age. Forests, and even lone trees, have not yet had time to repopulate our Catskills. This is such an uncomfortably austere view of the Catskills; we can scarcely believe it. But it is so.

Now we look down a little. The whole of the Hudson Valley in front of us is flooded. Stretching out across the valley for nearly ten miles is a grand glacial lake. It has a name; it is Glacial Lake Albany. We cannot see that far, but it extends off to the south, all the way to today’s New York City. Most of the way, it is about 60 feet deep, so it is a large lake. Cold too; it all formed from recently melted ice.

Maybe we cannot see to its southern end, but just to the right of our view is its current northern boundary. The waters of Lake Albany abut the edge of a valley glacier which is spread out across the entire expanse of the Hudson, west to east. This is the Hudson Valley glacier and, on this summer day, it is melting and in full retreat. Though warm, it’s a gray day. The glacier is in various shades of gray, broken by large black fissures. Enormous volumes of meltwater are pouring off of, and out of the glacier.

Suddenly we see the breaking off of a great chunk of ice. The disintegrating ice has become fragmented and unstable. A huge ice berg has broken loose and plummeted into the lake below. That berg sinks quickly into the waters and then, in a flash, rockets up again. Now it has fragmented into a hundred smaller bits. This miniature cataclysm had set loose a new natural disaster. The great splash has generated a tidal wave that is billowing off to the south. A chaos of foaming water, bobbing up and down with a host of small bergs, is expanding off to the south. The tumult rocks back in forth in the confines of Lake Albany, but in an hour or so, all settles down again.

None of this will ever be painted.